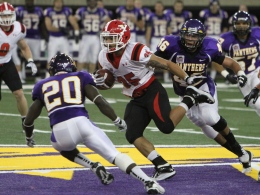 Junior tailback Jamaine Cook takes a handoff against the University of Northern Iowa on Saturday. Cook was held under 100 rushing yards for only the third time in nine games this season. The Penguins will look to get back in the win column this weekend against the Bison. Photo Courtesy of YSU Sports Information.

Throughout the 2011 season, the Youngstown State University football team successfully hunted Crusaders, Sycamores, Salukis, Cougars and Leathernecks. Now the Penguins look for another head to put on the wall: Bison.

“This is our championship game,” said senior defensive end Obinna Ekweremuba. “We have to win this game. We don’t have a choice. [If we win] this game, we’re making a statement that Youngstown State football is coming back.”

Ekweremuba added that the Penguins face a “sense of urgency.”

“We got to go out there and execute our jobs to get the win,” he said. “We feel like if we get this win, then everything is back in place for us.”

“They’re ranked number one, so they must be doing something right,” said junior center Mark Pratt. “I think we have to go out there and think like they’re number one.”

He added that the Penguins need to “approach [the game] this way.”

“I think we are going to come out with that mentality that this is a statement game for us [and] that we need to perform and show the nation what we can do,” Pratt said.

The Penguins play in a dome for the second straight week but on a different surface.

“This is more like the traditional turf that we used to have,” said head coach Eric Wolford. “It’s kind of like the turf that you have on your porch in your backyard.”

Wolford added that he worries about the Bison defense, especially when it comes to passing.

“They don’t give you a lot of opportunities in the passing game,” he said. “I think the other thing that goes unnoticed is they put tremendous pressure on the quarterback, and that starts with their defensive line.”

Sophomore quarterback Kurt Hess has compiled 1,925 passing yards and 19 touchdowns through eight games. Hess threw for 175 yards and one touchdown during the 21-17 defeat against the University of Northern Iowa on Saturday.

“It was kind of demoralizing a little bit, but I think it kind of opened our eyes,” Pratt said about the game. “We need to come more ready to play and get things going early and to finish games.”

One aspect of the UNI game that Wolford said needs corrected is the Penguins’ ability to close out games.

“It’s frustrating for everyone, myself included,” Wolford said. “In order for us to take the next step against these elite teams, we have to show that we can close, and who says this isn’t the week that we can show we can close them out? When I talk about closing, I mean closing on offense.”

To further elaborate, Wolford described one specific time when he was an assistant coach for the University of Illinois. The Fighting Illini upset the then No. 1 Ohio State University on Nov. 10, 2007.

“You have got to be able to stay on the field for seven or eight minutes and close the game out,” Wolford said. “We rode [Isiah John] ‘Juice’ Williams down the field, basically ran the ball every play and found a way to close the game out, and we won and upset them. That’s the next step we got to get ready to take.”

Ekweremuba said the team must also come out firing.

“We learned the hard way that we got to come out ready to play,” he said.

“We can’t come out flat, and I feel like we played better in the second quarter, but we got to come out ready for four quarters of football.”

Wolford made another Big Ten comparison, this time with NDSU and the victory over the University of Minnesota, 37-24, on Sept. 24.

“If you didn’t know what colors the schools were, you would have thought North Dakota State was the Big Ten team,” Wolford said. “I’m not pulling your leg when I say that. That’s recruiting. Let’s not kid ourselves. You got to go out there and recruit.”

Wolford said NDSU is the most physical team he’s seen on film this year.

“If you catch balls, you’re going to get hit; that’s their philosophy,” Wolford said. “Offensively, they like to pound on you. They’re going to motion around, and, all of a sudden, they’re running a play action on you.”

As a team, the Bison are tied first in interceptions thrown (one), second in scoring defense (12.89 points per game), fourth in turnover margin (+1.67 average per game), eighth in passing efficiency (155.97 passer rating) and tied ninth in red-zone offense (89 percent).