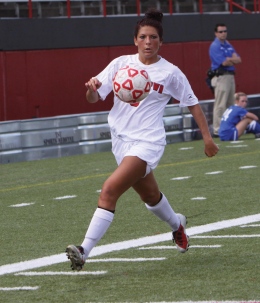 The Youngstown State University soccer team returned to its winning ways Tuesday night at Stambaugh Stadium, picking up a victory against Cedarville University.

The 3-1 victory ended a four-game losing streak to give the Penguins a 5-4 record, which is one shy of tying their record for most wins in a season.

“We were doing the good things but having letdowns,” said head soccer coach Will Lemke. “We need to get back to being consistent, get on a roll and play 90 minutes of good soccer.”

Despite the wet and windy conditions, the Penguins shined. In what was the first meeting between Cedarville and YSU, the Penguins were the clear aggressor, taking 20 shots compared to the Yellow Jackets’ four.

Freshman Tyesha Kizer scored the first point of the game with a header on an assist from teammate Katie Hohmann. The Penguins continued to stay aggressive as Jade Flory attempted a header, which was just high of the goal with five seconds left in the half.

As the second half began, YSU didn’t ease up, as Chelsey Haney and Heather Coonfare scored two more goals.

Cedarville eventually got on the board with a successful penalty kick from Jacoby Ziegler.

Lemke had mixed emotions about his team’s performance, saying it matched the weather conditions.

“We were impatient and over-relied on playing long and on our forwards finishing,” he said. “However, we did have a few good moments putting patterns together, and our young players made plays and found a way to score.”

Kizer was one of those young players who found the back of the net.

“Our play was kind of sloppy, but we held it together,” she said. “It was rough between the wind and the rain coming down; it was chilly.”

Lemke admitted that the adverse conditions got players off pattern.

“With conditions like tonight, it’s tough to string passes together,” Lemke said. “We need to learn from it, be more patient and adapt to the conditions.”

The Penguins open up Horizon League play at noon on Saturday against the University of Wisconsin-Milwaukee at Stambaugh Stadium.

“They’re struggling right now, and they’ll be hungry,” Lemke said of Milwaukee. “We need to match their intensity while staying patient and running our system.”