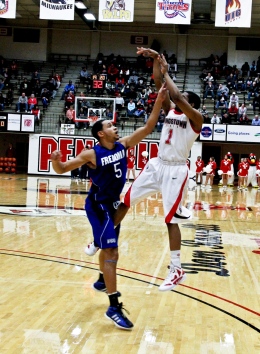 Eight players for the Penguins played 15 minutes or more. Head coach Jerry Slocum said in the post-game press conference that was a goal going into the game.

“We have been in so many close games that it’s hard to develop those guys that so drastically need to get those minutes,” Slocum said. “I thought [freshman] Fletcher Larson did a pretty good job in the post. I thought [freshman DJ Cole] did a good job at the point in terms of playing some back up minutes. I thought as a whole we really guarded well tonight.”

Allen said the offense played well and was able to share the ball efficiently.

“Coach always talks about having more assists than turnovers,” Allen said. “When we are able to do that, we are a pretty good team. When we move the ball and find the open man we tend to be all right.”

Senior guard Julius Bryant led the Blue Devils with 13 points. They came into the game shooting 39.9 percent from 3-point range but the Penguins held them to 18.8 percent.

Allen said keeping them off the scoreboard was a goal coming in.

“Coach wanted us to come out and try to hold them to under 40 points, and we were able to do that,” Allen said. “Obviously there is always room for improvement every game, but overall I was pleased.”

Slocum was also pleased with the defense as well, along with the play of Brooks who has been coming on strong as of late.

“He’s a guy that two weeks ago we said ‘listen, it’s about what you put in you take out,'” Slocum said. “We need to get in the gym, we need to work a little harder [and] be a little more patient. He might have been the best played on the floor in our two conference games. A good basketball player, and he has really played well the last three games.”

With Slocum able to get playing time to the bench, Allen was able to call it an early night. He said it was something he is not used to.

“When I came out in the second half, I knew I wasn’t going to go back in,” Allen said. “I just kind of got a chance to enjoy my teammates and watch them play hard. It was definitely a different experience, but it was fun.”

For as well as the team played, Slocum said there is always room for improvement.

“You got about an hour?” Slocum said with a smile. “I don’t think we shot the ball well at times. We had a lot of good transition baskets we didn’t finish on. I thought our offensive execution at times was a little loose.”