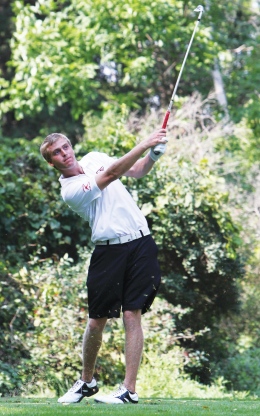 Junior Mark Olbrych follows through his swing during a recent tournament. Olbrych and the men’s golf team won its first tournament championship since 1999. Photo courtesy of YSU Sports Information.

Through its first two matches, the Youngstown State University men’s golf team has already hit a high and a low.

After winning the Colgate Invitational for their first tournament victory since 1999, the Penguins finished ninth out of 10 teams in the John Piper Intercollegiate, hosted by Bowling Green State University.

With the split results, a common word among the squad is “consistency.” “We need to play consistently day in and day out and shoot some scores that can help the team,” junior Mark Olbrych said.

On Sept. 8-9, YSU placed first out of nine teams at the Colgate Invitational, which took place in Hamilton, N.Y. The Penguins shot a two-round score of 598 to earn a 10-stroke victory.

It was the first tournament championship for the team since March of 1999 when they won the Eastern Kentucky Spring Invitational. Redshirt freshman Bill Gaffney was a medalist of the tournament, winning by seven strokes and shooting a two-round score of 143 (71-72).

Tony Joy, who is entering his 29th season as head coach, was pleased with how the team played.

“It was really nice to win,” Joy said. “We played so well on a great golf course.”

The tournament was the first time YSU played in the Colgate Invitational.

“I chose a tournament where the competition level would be equal,” Joy said. Joy boasted a young lineup in the season-opener: three freshman, a sophomore and two juniors.

One of the freshmen, Gaffney, shot exceptionally well.

“He’s from the Buffalo area, and he’s a long hitter with a lot of talent,” Joy said. “He sat last year but came back this year and has been playing really great.”

Joy said the promise his young group showed is encouraging.

“Players who can go out and play great individually really help the team play better and compete,” he said. “We’ve beaten a lot of great teams, but to go out and win the tourney is very encouraging,”

However, at the John Piper Intercollegiate, YSU took a step in the other direction.

The Penguins struggled, finishing ninth out of 10 teams and shooting a three-round score of 929.

Olbrych said team members will try to fix their mistakes by pushing one another at practice.

“Going against strong competition in practice only makes us more prepared for the tournaments,” he said. “We all hit the ball pretty good, but we needed to hole some putts early on to get our confidence going.”

And while Olbrych knows that focusing on the current year is the main priority, he also realizes the team is youthful.

“It’s really nice to know you have pretty much two full years left to play with these same guys,” Olbrych said.

As for Joy, he has been in the golf business for all of his adult life and has coached at YSU for nearly three decades.

“I really enjoy it,” he said. “It keeps me young and is very rewarding.”

Joy said he plans to continue to coach as long as he can keep relating to the kids and would love to reach his goal before he retires.

I want to win the Horizon League Championships, get an automatic bid to the regionals and get a team to the NCAA tournament,” he said.