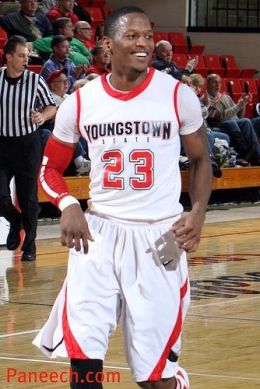 The Youngstown State University men’s basketball team has made a habit of bouncing back after disappointing losses. This game was no different.

Just 48 hours removed from a tough home loss to Butler University, the Penguins held Valparaiso University to its lowest point total of the season for a 71-53 victory at Beeghly Center.

Brooks made a couple layups to start the game, which he said helps him tremendously.

“I just wanted to get close to the rim and make it easy on me,” Brooks said. “Lately, teams have been taking that away from me, so I have been practicing on my game that can help me score and can help my team.”

Slocum emphasized rebounding and defense in Friday’s practice. Brooks said the team accomplished that on Saturday.

“In practice, that has all we really focused on, and learning their plays and executing our plays offensively,” Brooks said. “Our defense showed up today, and we rebounded the ball pretty good too.”

Perry said coming back strong after the Butler game was a goal for the team.

“Of course, we were devastated after the Butler loss, and so preparing for Valpo, we knew that nothing less than 100 percent was going to do,” Perry said. “So I guess we just came up with the mindset that we needed 100 percent, maybe more, against Valpo.”

The Penguins used a 16-0 run in the first quarter to help gain an early advantage. They held the Crusaders to minimal second-chance opportunities, and Perry said that helps YSU get out in transition.

“In this league, you always want to jump out to a big lead,” Perry said. “Every team is dangerous. On any given night, if you keep it close enough, any team can win. That is definitely a point of emphasis for us. Keep our foot on the gas pedal, per se.”

The last couple of times that the Penguins hosted Valpo, they led at the half, something that was not lost on Slocum.

“I reminded our guys this was a top-tier team in our league, and they are going to make a run at us,” Slocum said.

YSU is now 3-1 this season when facing the first-place team in the conference. The Penguins also defeated Valpo for the first time since Jan. 15, 2000, snapping a 14-game losing streak.

Slocum keeps reminding his team that there is still a lot of basketball to be played, but it should be an exciting finish.

“It is going to be fun come playoffs,” Slocum said. “Anybody can get it.”