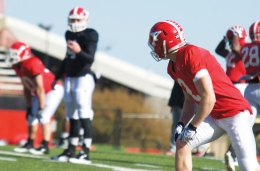 Sophomore wide receiver Christian Bryan looks over to sophomore quarterback Patrick Angle during practice on Monday. The Penguins began practicing in pads for the first time this spring on Saturday. Photo by Joe Catullo Jr./The Jambar.

Wolford and Hess, learning and growing with each other, have won nine games in two seasons. The Penguins were one win away from a playoff berth last year.

On Saturday, Hess said he has seen changes in Wolford that could help lead the Penguins into the playoffs for the first time since 2006.

“I see a lot of growth in him as a coach, and it’s great to see and hear,” Hess said. “He’s just more personable with a lot of the guys, and I feel more comfortable with him. The way he’s grown is just a model of how our program has grown.”

During practice on Saturday, the Penguins wore pads for the first time this offseason. Hess said he’s excited to wear them, even though he is not allowed to hit anybody.

“It’s been a long time since Missouri State, when we were allowed to hit somebody else,” Hess said. “The last two practices, we’ve been doing a lot of specifics, basic fundamental things, and it’s nice to come out here and play football again.”

“They looked good, but you should look good when you got everybody back,” Wolford said. “There’s no limit to how many points you can score, so that’s what we should do.”

Besides Wolford, Hess said he feels more comfortable with his linemen, receivers and running backs.

“I was talking to somebody the other day, and I was just like, ‘I don’t know how we do it. We just know how to practice now,’” Hess said.

The Penguins’ top offensive performers have returned to play at least one more season.

Junior Kevin Watts was third on the team with 28 receptions for 291 yards and three touchdowns.

“We’re all a pretty tight-knit group,” Hess said. “We know each other pretty well, and I think we can see that on the field.”

One thing the Penguins are incorporating is getting their tight ends more involved.

“Already so far, you can see all of the tight ends getting involved, getting a lot of balls so far,” said senior tight end Will Shaw. “We’re designing a lot of plays to give us a chance to make plays.”

“It’s almost my second year of being a tight end, so now it’s really understanding what I’m doing,” Shaw said. “The coaches have a lot of confidence in me now. I’m just making the most of my opportunities.”

“He’s brought a whole new passion and obviously a new scheme,” Wolford said. “These kids are grasping it pretty good.”

Wolford said both the players and coaches are responsible for those numbers.

“We’ve been talking about it,” he said. “You got to be accountable for a lot of things you do.”

While the Penguins are putting pieces of the puzzle together, they ended last year in a bizarre twist.

On Nov. 12, they defeated North Dakota State University, 27-24, in Fargo, N.D. The Bison were the No. 1 team in the Missouri Valley Conference and were undefeated. It was the first time in YSU history that the Penguins defeated a top-ranked team in the regular season.

In the following week, the Penguins fell to Missouri State University, who finished the season 2-9 at Stambaugh Stadium, 38-34, in the season finale. A victory would have pushed the Penguins into the playoffs.

“In the past two years, we were kind of getting acclimated with the coaches and vice versa,” Hess said. “But this year, we have all of the pieces together. This is our year.”