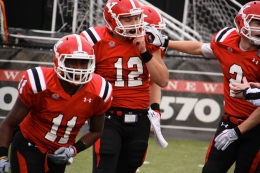 Sophomore quarterback Kurt Hess is greeted by teammates after he rushed for a touchdown Saturday against Western Illinois University. The Penguins’ offense will go up against the fourth-ranked scoring defense in the Missouri Valley Conference. Photo by Sam Marhulik/The Jambar.

“We said a couple of weeks ago we control our own destiny and take things one game at a time,” head coach Eric Wolford said. “Standings-wise, I really don’t know where we are. I know that if we take care of business, we’ll be in good shape. That’s all we worry about.”

The Penguins travel this weekend to face the sixth-ranked team in the division, the University of Northern Iowa (6-2, 5-1). YSU last beat the Panthers in 2000.

Sophomore quarterback Kurt Hess, who has passed for 1,750 yards and 18 touchdowns this season, said he is excited to play there for the first time.

Hess added that since the loss to South Dakota State University on Oct. 8, the Penguins need to win the remaining six games in order to reach the playoffs, and they are halfway there.

“If we don’t win this game or any other games down the road, we might not make the playoffs,” he said. “We try to be 1-0 every week regardless of who we’re playing, what rank they are or anything like that.”

Stanton enters Saturday’s contest with 22 total tackles (three for a loss), along with one sack, interception and forced fumble.

The Penguins are riding a three-game winning streak with Western Illinois University as their latest victim. YSU won the game, 56-14.

The Panthers, who won the MVC last season, return home after a 27-19 loss, ending a six-game losing streak to NDSU. They rank second in the MVC.

“Every time I see them trying to tackle somebody, they’re stripping the ball,” Wolford said. “They create turnovers. They’ve gotten better in the red zone. The red zone offense is good, but their red zone defense is better.”

UNI senior quarterback Tirrell Rennie, who may miss the game due to an injury, leads the Panthers’ “dynamic offense.”

“He’s a dynamic player,” Wolford said. “I told [UNI head coach Mark Farley] last year that he should come out early. He’ll play; there’s no question. He’s responsible for 250 to 275 yards of their offense.”

Rennie has thrown for 1,455 yards on 107 completions with 10 touchdowns and one interception. He is also rushing for 553 yards and six touchdowns.

If Rennie couldn’t suit up, freshman Jared Lanpher would fill in. He has completed 10 passes on 16 attempts for 114 yards and two touchdowns.

“For a freshman, he’s had some success, [but] they’re not going to change their entire offense for just one player,” Wolford said.

Regardless of the starter, Wolford has his eyes on the Panthers’ offensive line.

“They have one of the biggest lines in the conference,” Wolford said. “They will be a test for us up front.

It’s going to be how we control the line of scrimmage. They’re a good crew.”

Hess said he doesn’t consider this a rivalry yet.

“It’s definitely our rival game this week,” he said. “As far as a rivalry, they’ve had the better end of it so far. In order for me to consider it a rivalry, we need to go out there and give it all we got, which I think we will.”