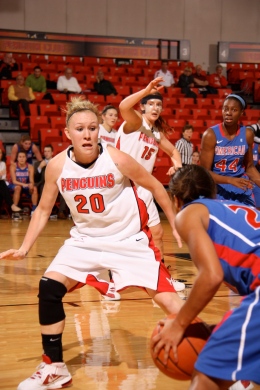 Devan Matkin defends an American University guard on Nov. 21 at Beeghly Center. The Penguins lost, 48-41, and look for their first home victory on Wednesday against Western Michigan University. Photo by Dustin Livesay/The Jambar.

“We are looking forward to it,” he said. “The road’s been good to us from a learning standpoint.”

The Penguins played in the DoubleTree L.A. Westside Thanksgiving Classic on Friday and Saturday. On Friday, the Penguins beat Loyola Marymount University, 64-50, but, on Saturday, they lost to the University of Northern Iowa, 90-73.

In Friday’s victory, junior forward Brandi Brown notched her 1,000th career point. She is the 17th player in YSU women’s basketball history to hit that milestone.

Brown said the trip revealed a lot about the team.

“I think it showed some of the progress we made, especially last year [when] we had a road trip, and we went to Florida, and we didn’t do so well,” Brown said. “This year, we came out and [gave] a lot more energy.”

Brown said rebounding is an aspect of the game the Penguins need to address. Opponents have outrebounded the Penguins by 43. The team’s rebounding margin per game is -7.2.

“Coach Boldon always talks about rebounding as effort and wanting it more than the other team,” Brown said. “So, as a team and individually, we need to understand that rebounds are imperative. … If we lose a rebounding battle, we have a better chance of losing the game.”

Wednesday’s game is the first of four against Mid-American Conference opponents. Boldon said the conference is a tough one to play in.

“They tend to be a pretty physical conference by nature,” Boldon said. “The more challenges you can throw at your team in November and December, the more prepared they will be for conference play.”

Brown said the Penguins must improve their defensive play to start the season.

“I definitely think our defensive effort has not been as consistent as it can be or as it should be,” Brown said.

The Broncos come into Wednesday’s game riding a 0-4 record to start the season, though they have had success against the Penguins. The Broncos are 5-2 against YSU.

The most recent game came last season when the Penguins lost in overtime, 69-64, after blowing a 24-point second-half lead.

Boldon said the Broncos will throw many defensive looks at the Penguins and will also play an up-tempo offense.

“They are a team that will try to play in transition and try and beat us down the floor,” Boldon said. “They will try to ball screen us a lot, which we saw a fair amount of this past week-end.”

Brown said the road trips are a good learning experience, but she is ready for some home cooking.

“We have been on the road and traveling, and we look forward to playing in front of our YSU fans that come out and support us,” Brown said.