On Sept. 22, politics will be taking over the entire first floor of Kilcawley Center. Student Experience will host its third edition of Penguin Nights, featuring a theme of “Red, White and BOOM.”

The event will run from 10 p.m. – 2 a.m. on the first floor of Kilcawley Center and is free to all Youngstown State University students. 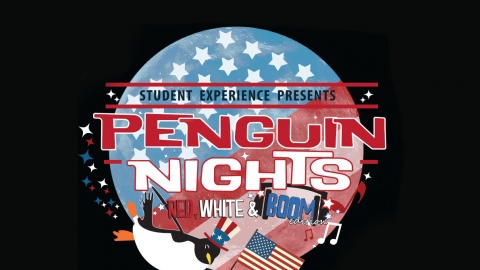 Vaughn Myers, an operations manager of Kilcawley Center, said that students can gain admittance through the Elm Street entrance after presenting a valid student ID.

Students can then head to the lower level to find a multitude of activities, including a showing of the movie “Central Intelligence,” a dance party, a game called “Not Your Grandmother’s Bingo” and more.

There will be an All-American themed buffet in the food court and a mock election where students can decide between presidential candidates Donald Trump, Hillary Clinton and YSU mascot, Pete the Penguin.

Sticking with the presidential election theme, students can stop by a selfie station to snap photos in “The Oval Office.”

The first main event will be Family Feud — the American President’s Edition. The teams will be made up of student organizations on campus and offer USA-themed prizes to the winners.

The closing entertainment for the night will be Upright Citizens Brigade, who take the stage at 12:15 a.m. The group is based in Los Angeles and New York, and was founded by comedian Amy Poehler.

Michael Cardwell, an operations manager for Kilcawley Center, said he was happy to know the Upright Citizens Brigade would be returning again.

“We had them here before back in January, and we had a great turnout along with great reactions from the students,” Cardwell said. “We’re expecting a large turnout, especially because of the good feedback we received from last year.”

During the night of festivities, many students will be volunteering their time. Kilcawley Center will be sending out a mass email in the coming days to extend the opportunity to all students who wish to participate.

Sara Pretoka, a YSU student and a volunteer for past Penguin Nights events, said that she expects a large crowd to show up to Kilcawley.

“There [is] free food and free entertainment, so I think a lot of students will come check it out,” Pretoka said. “It’s the third Penguin Nights, so it’s still new, but it’s gaining momentum to be one of the bigger events on campus.”