Actresses Kate Mulgrew and Taylor Schilling spoke about why they are voting for Democratic Presidential Nominee Hillary Clinton at The Federal on Friday. About 80 people, including Democratic Party leaders and Youngstown State University students, attended this event. 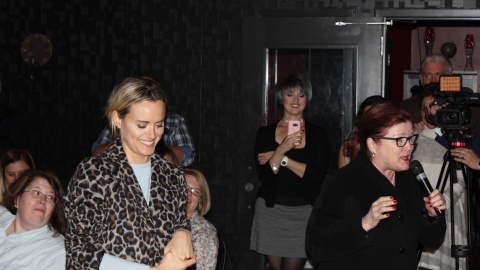 “I want everyone in this room … to get out and vote for a woman who is superbly qualified,” Mulgrew said.

Mulgrew and Schilling play the characters Red and Piper respectively on Netflix’s hit series “Orange is the New Black.” After giving a small speech, they met and took pictures with fans.

Ohio State Rep. Michele Lepore-Hagan said it was an honor having Schilling and Mulgrew come to the event to talk to Clinton supporters.

“They’re really passionate about this election, and they want to make sure that we get young people out to vote,” Lepore-Hagan said.

Lepore-Hagan stressed that she believes Clinton is the “most qualified leader,” and she said it’s important to get that message to young voters.

“This is really targeted at [college-aged voters],” Lepore-Hagan said. “I’m so happy to see the YSU kids from the College Democrats here, because it’s about energizing our base and getting people to understand that this is about your future.”

“I think it’s important to hold this event near the university to get the millennials engaged in voting for Hillary Clinton,” Betras said. “The crowd is mainly young, and we’re happy about that.”

Chris Moyer, the regional press secretary for Clinton’s Campaign in Northeast Ohio, said he was thrilled with the turnout for the event.

Moyer said Ohio is an important state in the election, so it’s essential to hold political events as election day draws near.

“Certainly this part of Ohio is very important, and the campaign has made a significant investment in this state since day one,” Moyer said. “We’re competing hard for every vote up until election day.”

Dylan Edwards, president of YSU College Democrats, said an event like this captures the interest of young voters.

“It was a great idea, because people under 30 love the show,” Edwards said. “It was a great way to get the millennial vote in the area by bringing people in who they watch on TV and look up to, and have them talk about why it’s important to get out and vote.”

Carissa Benchwick, a YSU graduate student who attended the event, got to meet the actresses. She said she was impressed with the stars’ knowledge of political topics.

“After hearing that Piper and Red would be just two buildings down from my apartment, I was blown away because I am a huge fan of OITNB,” Benchwick said. “I was extremely impressed by Kate Mulgrew’s poise, passion and knowledge about this year’s election and support for Hillary Clinton.”