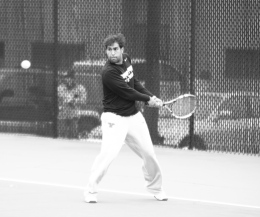 Senior Tariq Ismail returns a shot against Butler University on Sunday. The Penguins begin their run at a conference title against Butler on Friday. Photo by Nick Mancini/The Jambar.

The Youngstown State University men’s tennis team accomplished a few firsts over the weekend that each player hopes to incorporate at the Horizon League Championship.

Head tennis coach Mark Klysner said the team is in a great spot heading into Friday’s tournament in Indianapolis.

“I feel like there are matches we have maybe let slip we could have won,” Klysner said. “But, I think the most promising aspect of the team is we have yet to play to the ability that we can play at. If anything, this is the time we are going to peak and play our best tennis because we haven’t shown it collectively as a team yet.”

“The other teams in the conference, they realize we are a dangerous team in the conference because, on any given day, we can beat anybody,” Klysner said. “It is just a matter of the guys’ putting it together for three days.”

Sophomore Max Schmerin said the team has played well over the spring, but has yet to do it consistently.

“Anyone can really win the Horizon League. It’s pretty much a toss-up.”

Klysner said he is looking for Schmerin, who did not compete on Sunday, to play a vital role.

“He just took a day off to just kind of rest up and clear his head and get himself ready,” Klysner said. “He had a tough stretch in the league. We need him to play well. We need him to step up in the singles.”

Klysner also expects freshman Dawoud Kabli to continue his solid play. Kabli said that having some experience against the opponents would be a nice advantage.

Schmerin agrees with Kabli when it comes to experience.

“When I was a freshman last year, it is easier to play someone who doesn’t have as much experience this year for me,” Schmerin said.

“You kind of have that edge mentally against them, and that is big.”

The Penguins open the tournament with Butler on Friday, just five days removed from playing them. A victory over the Bulldogs could establish potential matchups against the University of Wisconsin-Green Bay and Wright State University.

Klysner said the team would love to have a chance at those rematches.

“When we lost to Green Bay, we really came out flat in that match,” Klysner said. “As a team, we should have had a better showing when we played them. Wright State is another match where the guys came out flat and didn’t play well.”

Kabli said the team just has to stay focused in the tournament.

“We just need to prepare our doubles game more,” Kabli said. “We got the doubles point [against Butler], so that was great. Hopefully, we will be able to get another win, learn from that match and move on.”

Klysner said this team has the potential to make some noise in the tournament. He said the team is excited and ready to get going.

“It’s a huge opportunity,” Klysner said. “Last year was nice to get in the conference tournament, but we didn’t feel like we necessarily had the team that could win it. These guys know that if they play well for three days, we have the team that could walk away with the title.”