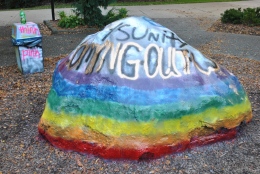 With the goal of providing comfort for those seeking to express themselves, YSUnity has events planned at Youngstown State University for this week.

Thursday is the big day that the lesbian, gay, bisexual, transgender, questioning, intersex and ally community has been looking forward to: National Coming Out Day.

A closet door will be set up for anyone wishing to “come out.”

“[The closet is] a symbolic gesture of finally being able to free oneself and be truthful to whoever you are,” Ronquillo said. “One of my goals is to be able to allow every voice, every member, to shine through and have a chance to tell their story.”

“That’s what the ‘A’ stands for: ally,” Bortner said. “This week is for everyone to come together and feel free to express himself or herself.”

Although Bortner said he feels safer, he still doesn’t feel fully free to be himself.

“This is a very conservative area, so I do feel like I have to hide it more than I would like to,” Bortner said.

Ronquillo said she agrees. “Even after much acceptance, there is still much difficulty in carving out a place in this world for people of the LGBT,” she said.

Between 6 and 8 p.m. on Thursday, YSUnity will host a NOH8 photo shoot. Participants will place a single strip of duct tape over their mouth and write “NOH8” somewhere on their face to symbolize their voices being silenced from Proposition 8 in California on Nov. 4, 2008.

Sophomore Jonathan Croes-Lanspeary said this week means a lot to him; it’s what convinced him to join YSUnity.

“It’s always been a lot of fun and very busy, which kind of explains the style of our group as well,” he said.

Ronquillo said she hopes next week will further humanize an already isolated group.

“We go home, cook dinner with our partners, watch TV together, etcetera,” Ronquillo said. “There’s no weird or intriguing mystery that surrounds the partnership that two people of the same sex share that is different from a heterosexual couple.”

Ronquillo brought new ideas for YSUnity activities with her from New York, where she was involved with another LGBTQIA organization.

“I’ve actually been planning the closet idea since mid-summer and am looking forward to its fruition,” Ronquillo said.

On Monday, YSUnity painted The Rock and drew on the sidewalks with chalk. On Tuesday, a flash mob will take place around noon at The Rock to get the week rolling. Then, on Friday, the entire campus community has the chance to show its pride for YSUnity Pride Day.

Coming Out Week will end on Friday with a roundtable discussion at 5 p.m. in the James Gallery of Kilcawley Center.

All week, a YSUnity information desk will be set up from 9 a.m. to 3 p.m. on the first floor of Kilcawley Center.