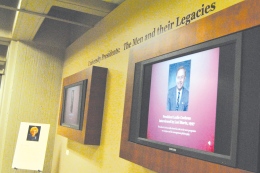 A fifth-floor wall of Maag Library titled “University Presidents: The Men and their Legacies” commemorates the university’s first six presidents. Below the exhibit sits an easel holding a portrait of the seventh — and first female — president:  Cynthia Anderson.

Cassandra Nespor, the exhibit’s director and main curator, said the word “men” was chosen because it was appropriate for the university’s history at the time. The Youngstown State University Department of Archives & Special Collections staff created the exhibit in the fall of 2009.

“We weren’t sure who was going to be the next president, and the candidates had not been announced at that point,” she said.

“We started working on the exhibit before Dr. [David] Sweet’s retirement was formally announced.”

Nespor said the exhibit was designed to be temporary, displayed for only one or two years.

“When it was announced that Dr. Anderson had been chosen, we quickly made the poster addition to the exhibit,” she said. “We didn’t change the vinyl letter title because I didn’t expect it to be up this long.”

L.J. Tessier, professor of philosophy and religious studies, said it should be obvious that either gender is capable of holding such a position.

“It’s startling,” she said. “Sexism isn’t something that men do to women. … It’s our culture. They don’t assume. It just didn’t occur to them.”

Tessier said that this oversight is both outstanding and typical.

“It’s the kind of sexism that lurks in our society,” Tessier said.

“Although it has a noble sound to it, the problem is that they made this exhibit and no one thought to say, ‘Wait, the next may be a woman.'”

Nespor expects exhibit alterations in the near future.

“The exhibits on the fifth floor rotate on a regular basis,” she said.

“There have been some departmental issues that have resulted in this particular exhibit staying up longer than we intended.”

Nespor said development for a new exhibit can take up to nine months. Ideally, exhibits would be changed annually.

“We have a few ideas about the new exhibit, but most likely it will be several smaller exhibits in that area,” Nespor said. “It will be related to university history but probably not anything about the presidents.”