Tables, sleeping bags, air mattresses, desktops, laptops and gamepads inhabited the many rooms of the McDonough Museum of Art this past weekend, and it was not an art installation.

Approximately 40 game developers of varying experience were locked in the McDonough Museum from April 1 to 3 for the first Youngstown Game Jam.

Game jams are video game development events that generally span one to three days. Participants form small teams to develop a game within the given time, working with a predetermined theme, submitting their work for the judgment of their peers and possible prizes. 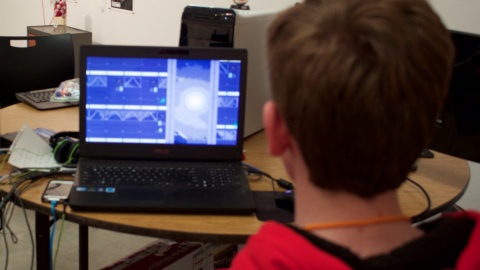 “They went above and beyond what I expected,” she said.

Corpier told participants that the theme of the game jam was “locked in.” They had the next two days and nights to create a game that tied into said theme.

Developers showed their games on Sunday at 3 p.m. Games shown ranged from a ball placed in a bin that is tasked with avoiding approaching barriers, an endless running, side scrolling game where the protagonist breaks through walls, a first-person platformer that takes place in a volcano, to a text-based werewolf role-playing game.

“Quantum Splice” is a two-dimensional, side-scrolling platforming game that uses a teleporting mechanic to assist the main character in traversing obstacles. The game follows an alien life form that is trapped aboard a space station.

Uroseva and Goldthwait had worked previously on tabletop games together but never teamed up to make a video game.

Uroseva focused on the visual aspects of the game: background, character design and environment. Goldthwait created a build of the game, testing the mechanics with a featureless block that represented the character model.

“It allows us to have a nice division of labor,” Uroseva said.

As the character and environment designs were finalized, Goldthwait dropped them into the game. Uroseva said that the background of “Quantum Splice,” a distant planet surrounded by stars, represented freedom, falling into the weekend’s theme of “locked in.”

Corpier said the game jam will likely become a yearly event. Games created at the Youngstown Game Jam will have playable versions uploaded to www.youngstowngamedevelopers.com.