The Youngstown State University football team (4-5, 2-4, Missouri Valley Football Conference) is set to compete in its final away game of the season. The Penguins will go on the road to face Southern Illinois University (4-5, 2-4 in MVFC ) to try to get to .500.

YSU is coming off a 66-24 rout of Indiana State University which ended a four-game skid.

A high-powered Penguin offense led by quarterback Ricky Davis toppled the Sycamores’ defense on the ground and in the pass. 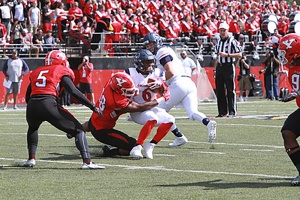 Davis immediately got YSU on the board less than two minutes into the game scoring off a quarterback keep play that stunned the SIU defense to start. That was one of two plays Davis scored on the run to go alongside four passing touchdowns. His performance landed him MVFC Offensive Player of the Week.

“It was a career day for me; it was memorable for sure,” Davis said.

Defensive end Fazson Chapman described the game as one that helped give YSU its “swagger” back heading into their final games.

After a few questionable performances from the offensive line, things seemed to work better in last week’s game.

“The offensive line responded so well,” Davis said. “Coach [Carmen] Bricillo had those guys prepared, it was exciting to see. Each one of those guys did their jobs; the receivers did their job; defense, it was just doing your job.”

With two games left in the year and its playoff hopes dried up, the seniors are looking to end strong.

“It’s very important just to show everyone that the loss column doesn’t mean anything,” Chapman said. “We’re still a team that will fight to the end and progress as the season goes, grow as a team and grow as individuals on the team to make it stronger.”

From here, Chapman said he plans to treat every game like a playoff game to finish the season.

YSU Head Coach Bo Pelini constantly preaches improvement from week to week. With its season coming to an end, he continues those sentiments even after a monster win.

“Our challenge is to prepare hard this week, prepare well and be a better football team than we were Saturday,” Pelini said.

They’ll face another tough test this week against SIU. The Salukis have a strong running back group that amassed 239 yards despite losing to Missouri State University  36-28.

The Salukis offense will also feature a two quarterback approach in light of losing its starting quarterback, Sam Straub, in a loss to the University of South Dakota.

“It presents challenges. They have a wildcat offense, so to speak, with one guy and they run their normal offense with the other guy,” Pelini said. “It’s like preparing for two different types of offenses. Both quarterbacks can do both things so that’s one of the challenges.”

As it seems to be the case every week, questions loom over the QB situation for YSU, with Pelini commenting on the status of Hunter Wells and Nathan Mays.

He said Wells has “progressively gotten better” and will be available for the next game. Pelini also said Mays is “day to day” as far as his injury status is concerned.

YSU will compete in Saluki Stadium against SIU this Saturday Nov. 11 at 2 p.m.