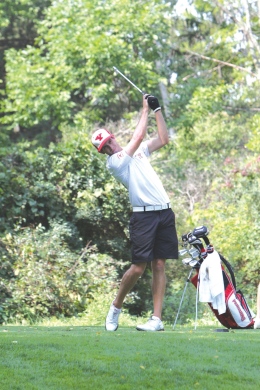 Senior Anthony Conn tees off during a tournament. Conn shot 18 over par at the NYX Hoosier Invitational. Photo courtesy of YSU Sports Information.

Youngstown State University men’s golf coach Tony Joy said his team practiced well on Friday and was ready for the NYX Hoosier Invitational in Bloomington, Ind., on Saturday and Sunday.

The Penguins finished last out of 16 teams.

“[It was] one of the worst performances ever,” Joy said. “It was just one of those things where all five guys played poorly at the same time, which normally doesn’t happen. … I think it was least expected, obviously, by me as the coach, but even the players themselves. The two seniors didn’t play well.”

Senior Joe Santisi tied for 73rd at 19 over par.

“Anthony’s really disappointed in his 81 [Sunday],” Joy said. “I think he’ll be fine. Joe’s played enough in his career where he knows how to play.”

“It was the worst in my three years here that I’ve been a part of,” Conn said. “That’s all I can really say about that.”

Conn said he added that his scores came at a good time: The Penguins have two more tournaments scheduled before the Horizon League championship, which begins April 27.

“You can’t play good every single week; it’s golf,” he said. “We got this under our belt. Everything happens for a reason. I feel the championship is wide open because there is not one team that proved their best.”

Joy said his biggest concern was that the team was not competitive.

“Obviously, a big disappointment on my part,” he said. “Just didn’t see that type of performance coming. It was a long weekend not for myself, but I’m sure for the players. We have a lot of work to do now, but we still have time to get competitive.”

Conn said the team was not competitive over the weekend.

“We go in every tournament to be competitive,” Conn said. “This week, we just really didn’t compete. It was almost like a fluke.”

The Penguins were without senior Michael Lower, who has not played since the University of Cincinnati’s Bearcat Invitational in October.

“Michael Lower, who was our senior captain, he had some problems in the fall and was suspended from the team,” Joy said. “It was just one of those things where there wasn’t any way that we could get him back. We had to part ways, and let’s just leave it at that.”

Joy added that since Lower’s departure, the two seniors have put extra pressure on themselves to lead the team. However, Conn said he doesn’t think so.