In November 2006, Youngstown State University quarterback Tom Zetts found himself in the Holiday Inn in Boardman. Instead of being at home, in his dorm and relaxing with his friends prior to the Penguins’ first round playoff game against James Madison University, he found himself in a hotel room. 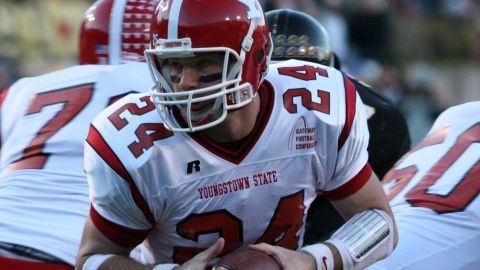 Not even 10 years removed from the departure of former YSU head coach Jim Tressel, the Penguins found themselves in the midst of a five-year playoff drought.

Zetts, the starting quarterback for the Penguins from 2004-08 and a graduate of Boardman High School, found himself as one of the players that brought YSU back to national relevancy.

Zetts said the most important part of the playoff run was the closeness with the team. He said the players were “sort of like our own fraternity” and the chance to stay at a hotel before a home playoff game allowed the players to focus on their teammates.

“When you work that hard together and you’re together so often, you can’t help but form some pretty amazing bonds,” Zetts said. “Without those guys, my college experience would not have been the same to say the least — I imagine it would be kinda disappointing if you had to compare it.”

The Penguins almost made the playoffs in 2005. As the players gathered to watch the selection show and see who they were going to play, the Penguins found out they were left out. For the players, their season ended, and they weren’t lucky enough to be one of the last teams in the tournament.

Zetts said the disappointment of not making the playoffs in 2005 made the team more motivated to prove the selection committee wrong in 2006. He said they couldn’t “leave any doubt in the minds of the people that make the decisions.”

YSU’s first game of the playoffs was at Stambaugh Stadium against James Madison University. In that game, Zetts threw for 24 of 40 for 314 yards passing — his completions, attempts and yards passing that day are YSU records in a postseason game.

“For me, I’m extremely fortunate that it got to be ‘my game.’ We had really good receivers, a running back that played in the NFL, we had an outstanding line,” Zetts said. “Really [running backs] Marcus Mason and Monquantae Gibson carried us for most of that season.

“Sure we put up passing yards, and we had our share of touchdowns, but our running game was really what carried us in a lot of those games. I just feel incredibly fortunate that when it came down to the playoff game, when my number was called, I was able to pull through for our guys. Yeah, it’s convenient that I got to have arguably my best game in four years on a night when we were on ESPN 2, under the lights, 65 degrees over Thanksgiving weekend and we had a huge crowd. I’m so grateful that all got to come together in one night.”

The Penguins hosted one more playoff game that season. YSU played Illinois State University in the second round and won 28-21.

Mason carried the Penguins that night and ran for 158 yards on 26 carries and a touchdown. Zetts threw for 146 yards and two touchdowns that night to advance to the FCS semifinals.

Falling Off the Mountain

In the semifinals, the Penguins were unlucky enough to played the No. 1 team in the nation, Appalachian State University.

At the time, the Mountaineers were considered one of the greatest FCS dynasties in the history of college football. Appalachian State won the national championship in 2005 and would go on to win three straight titles from 2005-07.

“I remember Armanti Edwards was their quarterback, and he was like trying to tackle a ghost, and when it came to their defense, those guys were just fast — they were extremely fast,” Zetts said. “They were like no team that we played to that point, and it was no surprise that the team won the national championship, and it carried over to the next season to open up with a win at [the University of] Michigan. So that kinda paints a picture. That was a very, very good football team.”

“Any game that’s close … the energy in the fourth quarter at Stambaugh Stadium is outstanding. So you miss that on the road, but at the same time, you kinda prepare yourself for that,” Zetts said. “You’re more focused, I suppose, on the game. You do your best to entirely block the crowd out when you’re on the road. It’s like a ‘you against the world’ type of deal — Penguins verses the world, that may seem a little dramatic, but when you’re out there, and you’re playing to win, that’s the feeling you have to have.”

The Penguins lost the game to the Mountaineers 49-24.

Zetts said he should have taken a different mindset into the game. He said he was so focused on the season ending, that he almost didn’t realize they would have needed to play in the national championship if the Penguins won.

“Looking back, we may have relaxed that little bit and took that edge off, because it’s getting so late in the year,” Zetts said. “It was our fault. That was our first experience in the playoffs as a team, it’s certainly not the coaching staff’s, but they can only take you so far.”

The Penguins failed to make the playoffs in 2007 after going 7-4. Zetts said the following season was “a tremendous disappointment.”

“It is a letdown, but now that I’m 10 years removed, you try to let that go and look at the big picture rather than looking at the chronological highs and lows,” Zetts said.

Zetts said Brian Wright, his former YSU offensive coordinator, had some advice for the team prior to playing in the first round against James Madison. According to Zetts, Wright said “To win and make a run you have to have things go your way too.”

Zetts said he can think of moments that every YSU national champion needed a little luck. And to this day, Zetts still believes that advice.