Tyler Miller-Gordon, Student Government Association president-elect, and Gabriella Gessler, executive vice president, want to make college more affordable by allowing students to borrow textbooks for their general education courses, so they don’t have to buy them.

“We will help students who may not be able to afford their textbooks or may not want to buy their texts succeed academically,” Ashley Orr, current SGA president, said. “Students will no longer be held back because they don’t have the textbook. Everyone will have access to the text on campus.” 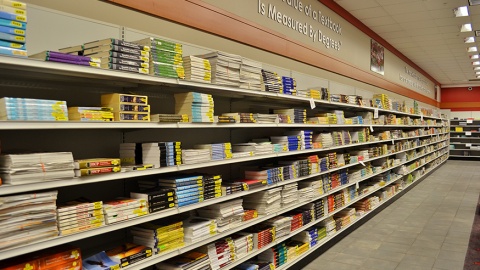 With the support of Maag Library, they are working on building a course collection, which will allow students to access general education materials for three hours, so they can study.

They are asking for collections and book donations from students. They aim to have two copies per course, which amounts to about 300 books in the collection.

If people decide to donate their old book to the cause, they will receive four game ticket vouchers that were provided by the athletic department.

“Our reasoning behind that is it’s kind of equivalent to, if you give back a $160 text, and you only get $40 for it,” Gessler said. “Students can now get that in tickets and invite family and friends that normally would have to pay for that access.”

Gessler said the course collection will feature general education course books, because students are encouraged to hold on to books that pertain to their major.

“Students that are entering into academia, they often want to build a library,” Miller-Gordon said. “I know that’s what I do. I have kept all of my textbooks that are relevant to me.”

However, in the future they may consider creating smaller course collections within each college that would carry textbooks for each college’s core classes.

“The Beeghly College of Education actually has something similar,” Miller-Gordon said. “Our hope is to maybe — if not expand the central collection inside Maag — maybe establish them within the departments, because that might be a little bit more feasible.”

They are also informing students of online resources that offer access to cheap or even free textbooks in digital formats, like gutenberg.org or Wikibooks. There are also open source textbook projects like open.umn.edu.

“We are hoping to promote this at orientation,” she said.

Gessler said she and Orr are appreciative of assistance from Joseph Palardy, the general education coordinator.

“We’re so grateful for everything he’s done for us,” Gessler said. “We’re so excited that the university has been behind this initiative so fully.”

SGA has been giving students the opportunity to sign a petition in support of House Bill 308, which would remove the tax from textbooks for post-secondary education in the State of Ohio.

“Student Government has been giving students the opportunity to sign on to HB 308,” Miller-Gordon said “We’re not necessarily endorsing it or anything, but it … [would] reduce the cost of textbooks by an enormous amount.”

“We’re going to keep our eyes open and keep our voices out there to make sure we are advocating for our student’s best interest,” Miller-Gordon said.
Along with using the course collection and supporting HB308, Miller-Gordon and Gessler said students should talk to professors to find out how often a textbook will be used in class and consider sharing a book with another student to split the cost. Students should also consider giving other students old textbooks they don’t need.