Lurking in the rafters of the Andrews Student Recreation and Wellness Center at Youngstown State University is a series of ropes and ladders. It’s called the high ropes course, and it’s designed to help with team building and leadership skills. 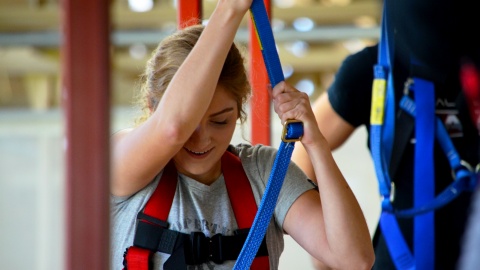 What a better way to see if the course really does its job than by good, old-fashioned, investigative journalism. So I rounded up Gabby Fellows, editor-in-chief of The Jambar, Gino DiGuilio, former columnist for The Jambar, and Macaela Roach, a good friend of mine, and hit the ropes.

Walking through the Rec, I felt like Taylor Swift in the Bad Blood music video when she’s walking with her squad and there’s an explosion in the background.

Needless to say, we were on a mission to kick some high ropes course butt. Or I was, the other three jokingly wondered how I got them into this mess.

When we arrived to the course, we were welcomed by R.J. Markowitz, the interim adventure recreation coordinator. He helped us strap on our safety harnesses, and we headed straight for the stairs.

Taking the first step was easier said than done. When I tried to step off of stable ground onto a course that was 18 feet in the air, it felt like my foot was glued to the ground.

The first obstacle is a beam you have to walk across with nothing to hold onto.

If you were at the rec on Thursday and heard a series of loud shrieks, it was me. I didn’t know what to do other than scream and put my faith in the harness that kept me tied to the course.

The next step was crossing a jagged piece of wood attached by ropes. This was the most difficult part of the course for me; the ropes wobbled with every step. The only thing that got me through were the kind words from my friends. Well, everyone but Gino, he just wanted me to move faster. 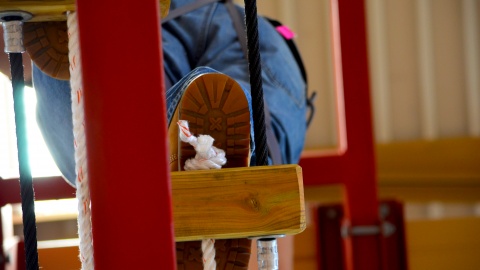 I let out a huge sigh of relief after returning to the ground. I had a new confidence and felt like I could conquer anything. Roach was standing on a stable surface with a giant smile on her face greeting me from my return.

Markowitz had two interns with him to help us with the course, sophomore Stephen Koneval and junior Collin Pope.

Koneval said just taking the first step is the hardest part. For a lot of people, that in itself is a milestone.

Everyone has the same experience, Pope told me. The hardest part for him is trying to get everyone in the group involved.

“You never want to have anyone sitting,” he said. “You always want them to just give it a try.” 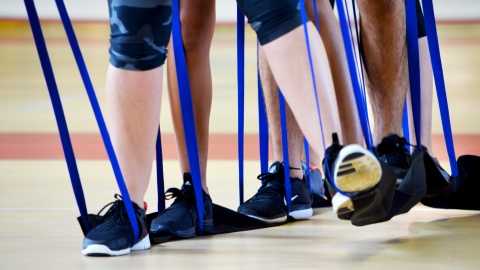 If you are looking for a way to improve your team, club or organization’s communication skills or to bond, maybe you should give the high ropes course a shot.

Meanwhile, I’ll be trying to recruit the rest of The Jambar to take on the challenge.