A crowd gathered with hands full of beach balls on Sunday to set a Guinness World Record during the sixth annual OH WOW! Silly Science Sunday.

Parents, children and volunteers gathered in the center of downtown Youngstown to set the record for the biggest crowd of humans and robots launching beach balls into the air simultaneously. 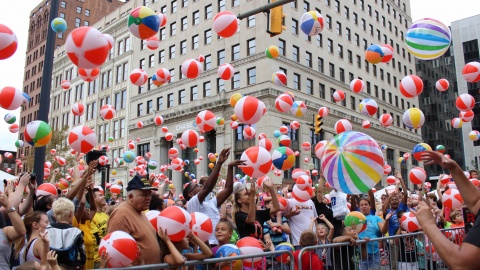 Volunteers blew up the 1500 beach balls before the event. The balls were tossed from the OH WOW! second-story windows down to guests in the street.

Ralf Urbach, the assistant and education facilitator at OH WOW!, said the record fell into a category of its own. He said a previous record was set for strictly humans throwing beach balls, but their record included a robot provided by the RoboCats robotics team.

“As soon as the balls went up in the air, I think it was all ours,” Urbach said.

This is the first time that OH WOW! has set a world record, and Urbach hopes the center will set more in the future.

“It may be on the scope to do again, because I thoroughly enjoyed being a part of something that nobody has ever done,” Urbach said.

The event drew in tents from nearby organizations to promote STEM programs and hands-on learning to children. YSU students and professors represented their fields of study at the event, explaining what they do and giving demonstrations to guests.

YSU Forensics demonstrated fingerprinting to children at the tent. Bailey Choma, a forensic science student, said it was a great opportunity to teach kids about something they don’t see every day.

“It was nice to show kids that there’s other aspects of science than just chemistry, engineering or physics,” Choma said. “We’re kind of a combination of everything.”

“[The comet] is made with dry ice, so when we mix the dry ice with the liquid, it makes a huge steam cloud, which represents the comet’s tail,” Wolbrecht said. “The kids love the steam.”

Other demonstrations and hands-on activities were provided at the YSU tent, including a chemistry show, music demonstrations using Theremins and ice cream made from dry ice. 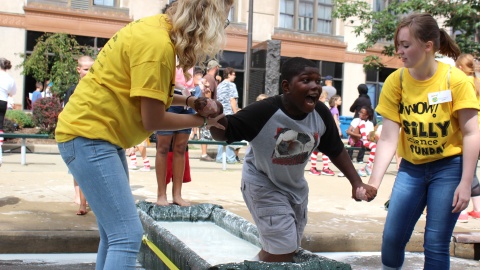 “A lot of people are interested in STEM, which is science, technology, engineering and math,” Urbach said. “So when you couple all of those things together, it draws an extremely large crowd. There are a lot of people interested in not only science, but just getting together and talking about science.”

Children were entertained by main stage events throughout Silly Science Sunday, including a contest to see which team could explode a watermelon first using only rubber bands.

Other stations were scattered across the event where volunteers interacted with attendees and demonstrated hands-on exhibits. Urbach said he wanted to thank the OH WOW! volunteers, who are the force behind making Silly Science Sunday possible.

“When we put things together, it comes from the volunteers,” Urbach said. “We have a wonderful staff, a wonderful full-time staff and part-time staff that we employ. They put in their hard work too, but we wouldn’t be able to do a quarter of what we do if we didn’t have volunteers.”