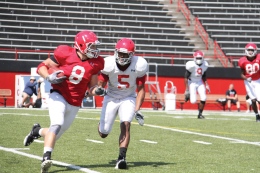 This reason alone has Shane Montgomery, Youngstown State University’s offensive coordinator, excited for the prospects of his experienced offense.

“[Returning 11 starters] has enabled us to get ahead,” Montgomery said. “We haven’t had to teach them a whole lot schemewise because they pretty much know all the plays. We just kind of fine-tuned the fundamentals.”

The leader of the offense, junior Kurt Hess, is entering his third season as the Penguins’ starting quarterback. He agrees with Montgomery that the team will benefit from familiarity.

“It’s definitely huge for our football team as a whole,” Hess said. “It’s really nice to know that everybody is on the same page. … It’s kind of like a brotherhood.”

“Hess has a good idea of what we want to do offensively,” Montgomery said. “And he’s got great leadership qualities. I think the guys look up to him, and he makes everyone around him better.”

One of the players surrounding Hess, senior Jamaine Cook, will once again be the Penguins’ workhorse running back. The Cleveland native is coming off a 2011 campaign in which he earned first-team All-MVFC, compiling 1,386 yards and 13 touchdowns.

At a bulky 5-feet-9-inches and 215 pounds, Cook can run through defenders as well as around them. Hess understands the importance of his lead tailback, who is a preseason first-team All-MVFC selection.

“He’s a great back,” Hess said. “Sometimes you see Jamaine run and you think he’s a power back because he’s always lowering his shoulder and running over people. But he definitely has a lot of speed. … Having him on the field with the ability to break a 40-yard run really helps us in the passing game.”

As for the YSU passing attack, Montgomery said he feels the receiving unit has more depth and talent than in recent years. With no seniors, two juniors, and the rest sophomores or freshman, the Penguins have plenty of youth to work with.

“They’ve still got lots of growing to do — both physically and mentally,” Montgomery said. “But I like the direction that group is going.”

Sophomore Christian Bryan, who led the team with 46 catches for 722 yards in 2011, is expected to be a favorite receiver of Hess, while juniors Jelani Berassa and Kevin Watts should see their share of touches. Also, tight end Will Shaw will be an attractive red-zone target.

“I like the leadership of Watts and Berassa,” Hess said. “And I like the looks of the younger guys like Kintrell Disher, Bryan and Andre Stubbs.”

And while Montgomery said he loves the play of the starters, he is glad to have depth onthe line this coming season.

“Last year, our offensive line played well, but we didn’t really have the top quality backups,” Montgomery said. “I think we’ve got a lot more depth right now than we ever had.”

Even with all of the firepower, head coach Eric Wolford said he wants to make sure his offensive unit isn’t too confident.

“The thing is,” Wolford said, “if you feel that you’re entitled and you think you’re going to show up and have success on offense without continuing to work at it, you’re wrong.” Hess, a preseason first-team All-MVFC selection, apparently received Wolford’s message.

“I’ve been working on my weaknesses, watching off-season film,” Hess said. “There are things that I can do better, as well as with my teammates and helping them out.”

No doubt, the attitude and work ethic of Hess allows Montgomery to boast so much confidence in his offense.

“If you watched us last year, we were a pretty good offense,” Montgomery said. “And I think we have a chance to be at least as good, if not better, this year.”