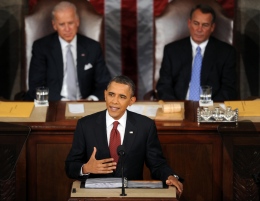 U.S. President Barack Obama gives the State of the Union address before a joint session of Congress on Tuesday in Washington, D.C. Photo courtesy of MCT.

Nation-building and reinvestment in America was the overall theme of President Barack Obama’s State of the Union address on Tuesday night.

The president laid out his “Blueprint for an America Built to Last,” focusing on manufacturing, job creation and reclamation from overseas, clean energy and education.

Obama called on Congress to “stop the interest rates on student loans from doubling in July” and to “extend the tuition tax credit.”

“In this economy, we cannot double the student loan interest rate. Without a new plan, millions of students will pay a crushing $5,200 more on their student loan than they otherwise would,” Williams said in a press release.

Obama said more needs to be done than just furthering subsidization, and he requested that states play a larger role in getting students through college.

“[States] need to do their part, by making higher education a higher priority in their budgets, and colleges and universities have to do their part by working to keep costs down,” Obama said.

After mapping out his plan for sustainable growth, he began to criticize the tax code, saying it made no sense.

“Right now, companies get tax breaks for moving jobs and profits overseas. Meanwhile, companies that choose to stay in America get hit with one of the highest tax rates in the world,” Obama said.

He also forwarded the idea of the “Buffett Rule,” or the idea that Americans who annually make $1 million or more should pay a minimum tax rate of 30 percent.

“We need to change our tax code so that people like me, and an awful lot of members of Congress, pay our fair share of taxes,” Obama said.

Pessimism was an early criticism.

“Can you blame them for feeling a little cynical?” Obama asked. “The greatest blow to our confidence in our economy last year didn’t come from events beyond our control. It came from a debate in Washington over whether the United States would pay its bills or not.”

While the Republican primaries rage on, the speech was the start of a roughly 10-month campaign by Obama.

“You really see the power of the office,” said Paul Sracic, chairman of the political science department at Youngstown State University. “It really is a contrast seeing the Republicans debate each other [Monday] night and the president stand behind the presidential seal in front of a joint session of Congress.”

“[Mitt Romney’s] record is finally being exposed,” Cutter said. “People are starting to see Romney for who he really is.”

At the college level, Cutter has noticed a growing amount of youth participation. She said she feels that Obama keeping campaign promises of health care reform and ending the war in Iraq connects him to youth voters.

The president’s push for work-study jobs will produce more than 100,000 summer jobs for low income and disadvantaged youth, Cutter said.

“The vision that the president outlined [Tuesday] night is a blueprint of the opportunities for success that lie ahead for Ohio and the nation,” Ryan said in a prepared statement.

With Super Tuesday approaching, and Ohio again of vital importance, attention is beginning to shift to the Rust Belt.

“The beginning of the speech, with its emphasis on manufacturing, was clearly aimed at Midwest swing states,” Sracic said.