Now the Penguins are looking to regroup and learn from their loss to the top team in the conference. 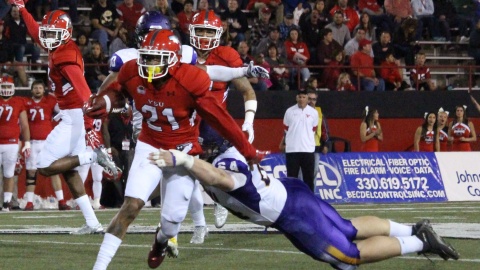 Head coach Bo Pelini said the Penguins need to work on fixing the small things. He said focusing on the team’s fundamentals at all positions is the team’s top priority.

“The little things are big things, and I’ve been saying that all along,” Pelini said. “You have to guard against that. You have to have the attentiveness, the discipline, the accountability to take care of those little things, because that’s what’s gonna make the difference. It was really obvious in that game.”

The Penguins will host Indiana State University on Saturday. The Sycamores are coming off a 22-14 win over Southern Illinois University. Indiana State enters the game with a record of 4-4, 2-3 in MVFC play.

YSU has the top passing defense in the conference and is 19th in the FCS — the Penguins allow 176.9 yards passing per game.

YSU lost the final game of the 2015 season at Indiana State after Sycamores’ kicker Eric Heidorn converted a 38-yard field goal in the snow as time expired.

In 2014, YSU quarterback Hunter Wells threw an interception on the Penguins’ first possession of overtime. Heidorn connected on a 28-yard field goal to beat the Penguins on the following possession.

For YSU, the loss at SDSU left the Penguins with a desire to get back to winning. Despite having the better record, YSU’s players are viewing themselves as the underdogs heading into Saturday’s game.

“Personally, this game is huge. I love the ‘underdog mentality,’” defensive tackle Cody Squiric said. “Nobody likes coming off a loss. I like being the one everyone rules out real quick. You prepare yourself as much as possible to win. Just because you lost, it makes you want to prepare harder each week.”

Last season, YSU’s first conference loss was a turning point in the Penguins’ season. YSU lost the next two games that season and fell out of playoff contention.

“The feeling in the locker room is different,” Wiggins said. “Everybody is ready to get back to practice this week and get after it, because we know that this is not the end of the season for us by any means. We’re ready to get after it and win out from here.”