Some might call Norman Finkelstein a controversial figure, but he said he would argue otherwise. Finkelstein, a political science professor and activist, visited Youngstown State University on March 15 to speak about his new book, “GAZA: An Inquest into Its Martyrdom.”

He was asked to visit YSU as a part of a lecture series presented by the Center for Islamic Studies, the James Dale Ethics Center, the Center for Judaic and Holocaust Studies and the College of Liberal Arts and Social Sciences.

Finkelstein was born into a family of Jewish Holocaust survivors and later became an assistant professor at multiple institutions such as DePaul University, Brooklyn College, Rutgers University and Hunter College.

He said he first got involved in the Israeli and Palestinian conflict in 1982 after Israel invaded Lebanon.

“Up until then I was involved in other political actions. Israel and Palestine weren’t on my radar and then I proceeded to do what I always do, which is read a lot, try to get the facts right and be certain, as certain as one can be,” Finkelstein said.

Finkelstein spoke about a multitude of topics involving the Israeli and Palestinian conflict. One such topic included if he thought the Hamas, the Palestinian-Islamic resistance group, were considered a terrorist group.

“The Hamas have committed terrorist acts, but in the great scheme of things it doesn’t amount to very much. It’s basically a resistance movement, but with very marginal means of inflicting harm,” he said.

Finkelstein said the period that caused “the most unjustifiable death,” was from September 2000 to 2006 when 1,000 Israelis were killed. He noted while the Hamas attacked the Israelites, 5,000 Palestinians were killed by Israeli forces, a ratio of five to one. Finkelstein also said the vast majority of the casualties on both sides were civilians.

He said during the Israeli assault on Gaza, Operation Protective Edge, over 18,000 Palestinian homes were destroyed, while only one Israeli home was bombed.

“The amount of death actually inflicted by the Hamas was pale in comparison to Israel,” Finkelstein said.

He believes he is not the controversial person who some have painted him out to be. 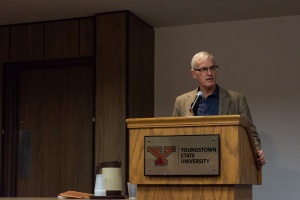 YouTube videos of Finkelstein speaking to broadcast journalists and talk show hosts defending Palestine and denouncing Israel have put him on the map. Some videos show him arguing with enraged Jewish students at public speaking events at universities.

Finkelstein said when he speaks he adheres to international law as best as he can. He calls it “a very imperfect mechanism,” but utilizes language that coincides with international law to reach a broader audience.

“If we didn’t have controversy, a kind of silent conformism would set in. Finkelstein, born and raised in a Jewish household, is controversial for his outspoken defense of Palestinians in their historical struggle with the state of Israel,” Lepak said.

Michael Jerryson, associate professor of philosophy and religious studies, said bringing alternative voices to YSU who are not inflammatory or incendiary, but rather data- and factually-driven, can be academically beneficial.

“I think it’s important to show the different viewpoints for us to learn more about how the world is not simply one perspective,” Jerryson said. “In this day and age, where we have our Twitter feeds and Facebook followings, we’re not used to having to deal with other alternative voices, but this is a country that has historically allowed us to come together and do wonderful things.”