The Next Best Art organization held a gingerbread house competition on Dec. 3 at the Tyler Mahoning Valley History Center. Ten houses were entered in the competition, and each one being a little different than the other in terms of size and time spent creating the houses.

Bill O’rly, a board member of Next Best Art, said making gingerbread houses can be as easy as one wants it to be.

“One person might be making a small, simple, traditional house, and spend an afternoon on,” O’rly said. “Another person might be using an actual building as a reference, and include lights, or mechanical details.”

Categories were divided by age with a winner in child, adult and an overall group winner. The group winner emulated a log cabin, and was larger than the other competitors. 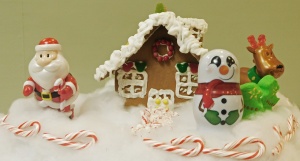 “It’s about creating dialog between people where there may not have been before in an environment, and community where things have been certainly improving, but have been economically difficult for quite a while,” O’rly said.

Leann Rich, the external relations manager at the history center, said hosting the competition brings a nice addition to the Christmas marketplace aspect happening the day of, and though the competition resembles some of their other hosted events, it’s their first time hosting a gingerbread house competition.

Executive Director of Next Best Art, Courtney Waskin, said she wanted to hold the competition because she felt Youngstown deserved a reason to gather and celebrate the season. The organization is using the competition as a trial run for next year’s event, which they have higher expectations for, and raising the entry fee cost with 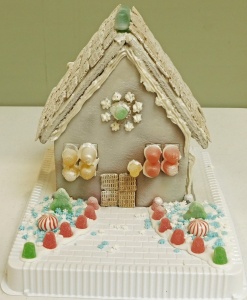 the intent to provide each baker with a gingerbread house kit.

Money raised will also be donated to struggling children and adults. Next Best Art organization became a 501(c) (3) in 2012, but can trace its beginnings as far back as 1980 when their art director, James Pernotto moved back to Youngstown from New York. Today, the organization contains seven board members and plans on expanding.

O’rly said goals for the non-profit in the future entail promoting arts and entertainment events in the valley, and expanding the arts community.

“Plans include educational programming, as well as development of a local artist in residence pogram,” O’rly said, “and creation of a collaborative workspace with shared resources for artists, which is something that could have huge economic implications for the area”

O’rly believes helping artists and their sales can economically benefit Youngstown as a whole. He said artists and art communities, more often than not, drive and inform economic development and recovery, especially in recovering post industrial areas like Youngstown. 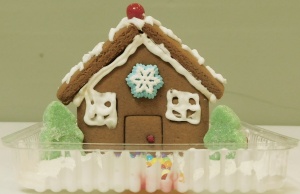 “We feel that very often, especially here in the Valley; these resources are under-utilized, and it’s a missed opportunity for the entire city,” O’rly said.

To see Next Best’s next event, check out their Facebook page or visit www.nextbestart.com