The topic of persuading students and community members to stay in the city was a recurring issue throughout the town hall.

Marissa Snyder, a YSU student, asked if Brown and Baldwin will have any “millennial engagement.”

Baldwin responded by inviting millennials and other young community members to her chamber where she said she would talk with them and explain how the system works.

The room burst with laughter when Jaylin Archie, a YSU student, asked how they plan on fixing the pothole problem in Youngstown after he explained that two of his friends had three flat tires within two weeks.

“The father in me says slow down. The mayor in me says we have to look at best practice and how we can get better at keeping those potholes filled and keeping them closed up,” Brown said.

Cryshanna Jackson Leftwich, associate professor in the politics and international relations department, voiced her frustrations with the recent faculty union contract negotiations at the university. She asked how the city was going to keep the millennials if they can’t keep the other generations from leaving due to low pay.

Brown referenced the problem the local police department face with the competitive wages that other departments offer.  He said in order for people to stay in Youngstown there has to be a collaboration between YSU and the city. 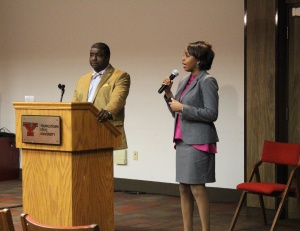 Brown said according to statistics, people doing the home buying are honest citizens, but aren’t being careful enough when contracts are written.

He said home buyers are so eager to own a home that they don’t look carefully between the lines, which essentially sets themselves up for failure.

“It’s going to have to be up to the legislators to make it [illegal],” Brown said.

The town hall was hosted by YSU Student Government Association.

Ernie Barkett, SGA vice president, said SGA and the mayor plan to conduct monthly meetings to keep the conversation going about what the university needs.

“We understand that YSU and the community are hand in hand. Right now we are trying to get a grocery store installed on campus, so that’s something that I’m extremely excited to start working on together,” Barkett said.

He said it’s important for the elected officials to hear from the younger community because they will soon become the biggest voting base.

“What Mayor Brown was saying tonight is that we want to see change. We have to understand the only way we can have that change be met is if we talk to our officials,” Barkett said. “If we go to the meetings. If we do the hard work that no one really wants to do, we get the end result that we all want to see.”