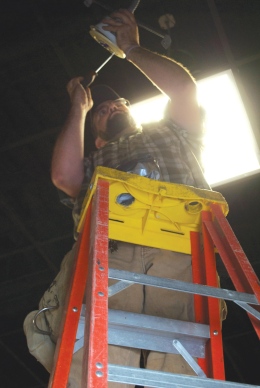 Another round of renovations draws to a close as Youngstown State University continues its quest to modernize campus spaces.

University officials set aside $9 million — raised mostly by the sale of bonds — to extend the life of the M-2 parking deck and update auditoriums in DeBartolo, Cushwa, Moser and Ward Beecher halls.

So far, costs for new flooring, seating, wall coverings, lighting and audiovisual equipment in DeBartolo and Cushwa halls’ auditoriums is $1 million less than the $2.5 million estimate.

Richard White, associate director of planning and construction, said the renovations will make educational spaces comparable to those in Williamson Hall.

“We completely gutted the auditoriums in Cushwa and DeBartolo and essentially started from scratch,” White said.

“We worked with the interior designer that developed the finishes for [Williamson Hall] and came up with a theme that we can use throughout the buildings. All the seating and lighting were replaced, along with the carpet and wall finishes. All of the technology was upgraded so the auditoriums are now modern in finish and state of the art in technology.”

He said the auditoriums hadn’t been updated since their construction more than 30 years ago.

All involved worked to finish just in time for the beginning of the fall semester.

“It’s going to be down to the wire,” said Jason Foster, an electrician for B&J Electric, as he worked on wiring for the DeBartolo Hall auditorium on Thursday.

A second phase for DeBartolo Hall — which would involve the renovation of corridors and offices — is scheduled for next summer.

In addition, Dana School of Music students will soon find themselves practicing in rooms with improved soundproofing.

“They were not soundproof,” Karly Berry, a junior music education major, said of the old practice rooms. “Sometimes your ears would be ringing after practicing, or you could hear the people practicing around you, and it was difficult to concentrate.”

Michael Crist, director of the Dana School of Music, said the project’s completion date has been delayed six weeks.

White confirmed the delay, adding that a project manager was fired for failure to order doors and flooring materials.

Practice rooms are now open for student use, but the contractor is waiting on acoustic doors and rubber flooring.

Installation will take place during nights or weekends to minimize intrusion on student activities.

Renovations to other YSU buildings include the second phase of Kilcawley House, which will undergo a third and final phase next summer.

Electricians discovered a glitch in the electrical wiring to Kilcawley House’s new elevator. The elevator was wired into the same panel as the building’s washers and dryers.

Subsequently, doing laundry disabled the elevator. The mistake was found before students moved in, and it has been fixed.

In Cushwa Hall, cars and equipment for two elevators are being replaced; improvements will be complete before the month’s end.