Duncko began the organization in 2014 to host YSU’s first hackathon, HackYSU, in the spring of the following year. Since then, he has lead the organization and expanded it from the hallways of Meshel Hall to Stambaugh Stadium’s DeBartolo Stadium Club. 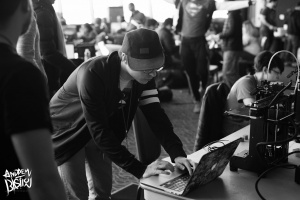 “Joe did a wonderful job trying to teach everyone that was working with him as members, officers and people,” Kost said. “It wasn’t a stereotypical, ‘leadership left and now everyone is left floundering,’” Kost said.

The event will be hosted in the Chestnut Room in Kilcawley Center in March. Participants who want to form teams and create new projects over the 72-hour period will now have access to one of YSU’s premiere facilities.

Judah Maendel, the chair of the Penguin Hackers, said the application process includes speaking with others rather than having them join by filling out papers.

“We can’t just fill out the forms that they usually have people fill out because our event is overnight,” Maendel said. “We have to talk to people instead.”

HackYSU has been looked at as an exceptional undertaking. Taking place over three days, from Friday afternoon to Sunday morning, the event includes free food for the participants, mentors to help with the available hardware and software as well as reimbursement for travel expenses.

“It’s basically a year-long event prepping for a three-day event,” Kost said. “We do fundraising directly with entities, companies and groups to assist putting on our keystone events.”

Nicholas Iovino, the Penguin Hackers treasurer, said acquiring sponsors is important to the group and one of the major factors in organizing HackYSU.

“Each of us generally only take on a few sponsors to get in touch with each year so that we can provide them with the attention that they deserve,” Iovino said.

Although preparation for March’s HackYSU has already begun, the Penguin Hackers are also busy preparing for, the Local Hack Day, on Dec. 3 from 9 a.m. to 9 p.m. This event began last year to raise awareness for the larger hackathon event and provide more opportunities for students to learn from lecturers.

“Last year we had Shaquille Stoutamire, who gave a talk on game design using Phaser and JavaScript,” Maendel said. “We’re going to have him back because people loved learning how to make simple games.”

With changes to venue and leadership for the group, Iovinio said new recruits and veteran organizers have ambitious goals for the organization’s future.

“We’ve been seeing around a 50 percent growth in attendance each year,” Iovinio said. “I know everyone involved would be excited to reach 200 participants this year, a goal that’s definitely within reach.”