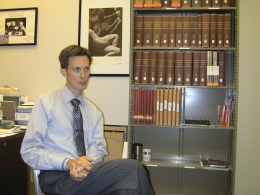 Scott Irelan, the new chairman of the Youngstown State University Department of Theater and Dance, was standing in a hotel lobby in Illinois when he received a job offer over the phone.

Irelan is replacing Frank Castronovo, who retired from the position after 41 years in the department.

Irelan brings with him stories of touring as a professional actor, 10 years of teaching experience, a published book and loads of advice for his students at YSU.

He accepted the position because he wanted to be closer to family in Ohio and has held interest in teaching theater for years.

After completing his bachelor’s degree in communication and theater at Bowling Green State University in 1998, Irelan spent two years touring as a professional actor in Kentucky.

“A Christmas Carol” and “The Sorcerer’s Apprentice” are among the plays in which he performed during that time.

After two years of acting, he decided that he was done and ready to return to BGSU to obtain his master’s degree in theater.

After completing his doctorate in 2006, he began teaching world and U.S. theater history at Illinois State University. He now teaches this course at YSU.

“But with most of the theater arts and arts in general, you just kind of have to blaze your own trail. So, I just put my nose to the grindstone and went,” Irelan said.

He said success is fine, but it doesn’t offer as much as new students might think.

“Failure is a good thing. You learn more from failing than you do at succeeding,” he said. “So, if you’re miserable at something, then figure out why and do better next time.”

“Realize that college isn’t about getting a job; it’s about developing as a human being,” he said.

Irelan wasn’t sure what would come out of his college career as he started his undergraduate education as a microbiology major.

“It wasn’t exciting to me. There was one answer and only one answer, and I just found that boring,” Irelan said. “I think the most important thing, though, is to have a pretty broad experience.”

His favorite part about teaching, he said, is seeing students transform.

“You meet students when they’re 18 or 19 in a [general education] course, and then to see them three or four years later, seeing that leap in maturity, is great,” Irelan said.

He teaches theater history at YSU and is directing its production of the Broadway musical “Rent.”

Nancy Andersen Wolfgang, instructor of theater and dance at YSU, is working on the production of “Rent” as well.

“I think he’s a really good leader,” Wolfgang said about Irelan. “I think he’s the right person at the right time to make changes and move the department in a good direction.”