Tyler Miller-Gordon and Gabriella Gessler have set their agenda for Youngstown State University’s Student Government Association, and it looks like they’re going to be busy.

Miller-Gordon is this year’s SGA president, and Gessler will serve as his executive vice president — she previously held the same role in former SGA President Ashley Orr’s administration.

They also share many goals with last year’s administration with a focus on improved environmental and economic sustainability.

But one of their first initiatives is unique — a push to make YSU a voting campus. Miller-Gordon said Ernie Barkett, former president of the YSU College Democrats, reached out to SGA and asked them to make sure students have several opportunities to register to vote. 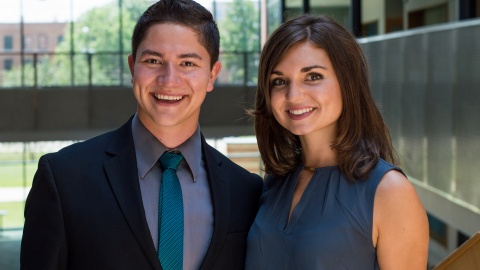 “It’s extremely timely seeing as we’re approaching the election,” Miller-Gordon said. “We want to make sure that students have the proper materials and education in order to vote.”

To improve economic sustainability, the food pantry — which SGA tested for two-and-a-half weeks last year — will be open Wednesdays from 3-5 p.m. and Fridays from 12-2 p.m. all year long. The pantry provides non-perishable foods to students, free of charge.

“We’ve received such overwhelming support from the community,” Miller-Gordon said.

He and Gessler attended the Associate for Classified Employees union picnic, and they said the amount of donations they received nearly doubled what they already had.

Since taking the office of executive vice president at the beginning of spring semester, Gessler has worked to make textbooks more affordable for students, but she said it’s been hard to get the initiative off the ground.

The initiative aims to provide educational information to students and faculty and establish a course collection in Maag Library with textbooks for general education courses.

“We kind of hit a wall logistically and ran into some issues just with communication with students and professors,” Gessler said. “So we kind of had to step back and reassess our means of accomplishing that.”

She said the transition of the bookstore to Barnes & Noble slowed down the process, but Provost Martin Abraham has been extremely supportive, and they’re making some headway.

On the environmental sustainability front, SGA will work alongside Dan Kuzma, manager of the YSU Recycling Program, to prioritize composting. They’re also working with the Mahoning Valley Food Coalition to begin holding pop-up markets on campus, which Gessler said is a response to students who wanted more opportunities to obtain fresh foods on campus at affordable prices.

They’re also attempting to take advantage of the INPLACE, or Innovative Plan for Leveraging Arts through Community Engagement, grants the university is offering. One of the areas prioritized by the grants is green infrastructure, Gordon-Miller would like to use it to bring a greenhouse to campus.

“All I do is dream about greenhouses and doodle greenhouses,” Gordon-Miller said. “I can’t get over it.”

The food grown in the greenhouse could be used to help campus catering increase the amount of local food they use or to supply the food pantry.

They will also continue to distribute the familiar SGA water bottles. All first-year students will receive bottles at orientation, and the rest will be distributed throughout the year.

Miller-Gordon said they want to continue work to increase the representation of students of color across campus with what they’re calling the AALANA initiative — for African-American, Latino, Asian and Native American students.

As for SGA’s own diversity, they said they’d like to see that improved as well. Gessler said just from looking at resumes without knowing demographics, they’re seeing an increase in students involved in diverse groups or advocating for diversity.

“It was a lot more common in the applications, which is very encouraging for us, because a lot of our efforts are based upon that,” Gessler said.

Miller-Gordon said they also want to continue making efforts to educate the campus community on campus with events like the panel on Islamophobia that was held last semester.

SGA will also be working to increase their communication with students, so more students are aware of the resources at their disposal. In addition to a marketing campaign, they will be sending out a monthly newsletter to let students know what they’re doing.

Increasing SGA’s appropriations budget by $125,000 was a signature accomplishment of last year’s administration. Miller-Gordon said making sure it gets used will be a happy challenge.

SGA intends to reach out to student organizations and make sure they apply for funding, but at the same time they want to continue to defray the cost of events rather than funding them in full.

“We do want to see them going out and fundraising and putting in the work to make their organization stronger,” he said.

They will also extend appropriations to student-sponsored university programs like Penguin Productions and YSU Marching Pride.

Gessler said they will keep the SGA office door open to students concerns, and they are open to changing their agenda.

“A lot of our initiatives are just dictated by the needs of the students,” Gessler said. “If we start with an initiative, and it doesn’t really grab hold or impact a lot of students, we’ll just shift gears.”