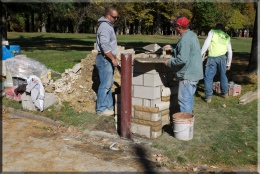 Workers with Lencyk Masonry construct the pillars that will act as mounts for new iron gates at the Park Avenue entrance of Wick Park. Photo by Kevin Alquist/The Jambar.

Youngstown CityScape and the Wick Park Neighborhood Association are working together to complete projects that will both help and hinder access to Wick Park.

The projects include the installation of gates that will block vehicular traffic from Park Avenue after dark and the addition of a path from Fifth Avenue that increases accessibility to the park for pedestrians. In addition, concrete has been poured for additional parking spaces near the building at the center of the park.

The projects will likely be completed before the start of winter.

“The idea of the infrastructure work was to design the park to be accessible for everyone,” said Sharon Letson, executive director of Youngstown CityScape. “The path helps serve the elderly or disabled, and people who may be dressed nice, say, in high heels, where walking is an inconvenience.”

The pillars were constructed two weeks ago and await the addition of the gates, which will be made of iron and painted black. They will be open during the day and locked at sunset every night by the Youngstown Parks and Recreation Department to keep cars from entering the park after hours.

Gary Davenport, immediate past president of the WPNA, said the gates will make the park safer and more aesthetically pleasing.

“[We] want the gates to prevent stop-and-go vehicular traffic through the park at night,” Davenport said. “That makes the park generally safer and more secure.”

Other renovations to the park are planned for the near future.

Youngstown CityScape, in coordination with Youngstown Litter Control and Recycling, the Davey Tree Expert Company, Keep Ohio Beautiful and the Mahoning County Green Team, will host a tree-planting event on Nov. 15. The event is in honor of America Recycles Day, and students from Harding Elementary School, located about a mile north of Wick Park, will also participate.

“The event is a nice educational component for the students and the neighborhood,” Letson said.

A tree will be planted near the newly constructed path. In addition, the Davey Tree Expert Company will remove the park’s dead trees and prune existing trees.

“Wick Park is an anchor to that neighborhood just like the university is, so its improvement is clearly a key in moving forward for the [North Side],” Letson said.

1 comments Anonymous Tue Oct 23 2012 12:37 As a new resident to the north side, seeing things improving and moving forward is both exciting, and a chance for me to dig in. Good article.