The new chief of police for the Youngstown State University Police Department is a familiar face for YSU.

Shawn Varso, formerly the interim chief of the Youngstown State University Police Department, was selected as the chief. He will begin on May 1, and is replacing former police chief John Beshara. 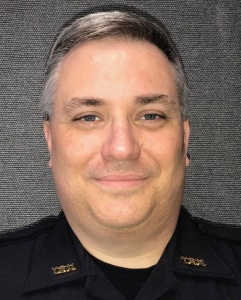 Shannon Tirone, associate vice president of University Relations said Varso’s experience and understanding of how the YSUPD works made him an ideal candidate for the chief position.

“We are extremely proud of the entire police department and we do look forward to him taking us to the next level,” she said. “We are already running a tight operation with our officers.”

YSU has been Varso’s stomping grounds since 1990, when he began working for the YSUPD as a student employee while studying criminal justice at the university.

After graduation, he worked over 60 hours a week doing part-time work for the Poland Village Police Department, Mill Creek Metroparks Police Department and YSUPD until he was offered a full-time position with YSUPD in 1997..

Varso said the university has expanded a great deal since he first started working at YSU.

“The campus has exploded from the old development and gotten bigger,” he said. “It’s been a really rewarding experience, working with the administration, students and my fellow officers,” he said. “It’s a boost for me to be able to be the head of a department I started off working for as a student.”

Varso said the YSUPD takes a proactive approach to their job, and stays on top of what’s happening at YSU and in surrounding communities.

“We are pretty good at taking care of a situation before it gets any worse. Our officers go above and beyond with what they do. They’re highly motivated. I couldn’t ask for a better department,” Varso said.

When a fraternity was robbed in Fall 2016, Tirone said officers went to the house to make sure safety features were in place and recommended things such as a new deadbolt lock to prevent future break-ins.

Varso would like to continue to reach out to students in these situations, and one of his platforms involves YSUPD reaching out to the campus community regularly so people can talk about their safety concerns.

“I want us to come to them and actively seek what they’re problems are, not wait for them to come to us with the their problems and we haven’t done that well in the past,” Varso said.

Varso said they have tried various methods of reaching out to the Youngstown community, such as lunch with the chief, and he has some new ideas to form a better relationship between the campus community and the YSUPD.

Varso would like to form what he an advisory group of students that meets once a month to discuss what student concerns are, and start a program called “citizens police academy”, where student volunteers spend a couple hours a week learning about things such as how the YSUPD functions and laws.

Communi would also like to have more students involved with ALICE training, so they can be better prepared for any emergencies.

“I think our officers treat this community as their home with pride, so when they are talking and mingling with students and staff it creates more trust,” Tirone said.