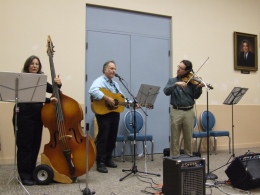 Zach Miller, along with his father and mother, perform bluegrass music for the opening of “New Harmonies: Celebrating American Roots Music” at the Youngstown Historical Center of Industry and Labor. Photo by Chad Travers/The Jambar.

Zach Miller, a Youngstown State University Dana School of Music student, performed bluegrass and traditional country music with family members at the opening of a new exhibit in Youngstown.

“New Harmonies: Celebrating American Roots Music” is an exhibit produced by the Smithsonian Institution that is touring Ohio in partnership with the Ohio Humanities Council.

“New Harmonies” opened Nov. 22 at the Youngstown Historical Center of Industry and Labor.

“The main beat of the exhibition is the ongoing cultural process that has made America the birthplace of more music than any place on earth,” curator Robert Santelli said in a press release from the Ohio Humanities Council. “‘New Harmonies’ provides a fascinating, inspiring and toe-tapping listen to the American story of multicultural exchange.”

Roots music is a term that first emerged in the 1980s to describe the roots of popular music, but it has evolved to mean all music that has grown out of older folk traditions.

“American roots music rose out of America’s story, carrying out history and cultural identity in its songs,” Santelli said. “American music is about freedom — freedom to choose, to change, to hang on to what’s important to you.”

The exhibit highlights the interconnected nature of American music and explores working-class music and musicians.

“Country singers borrow from the blues,” Santinelli said. “Blues musicians pick up a thing or two from country. In music, barriers fall.”

Traditional musicians often begin by learning from family members, and Miller is no exception. Miller, a music performance major, grew up touring the bluegrass circuit with his father and mother.

The Ohio Historical Society put out an open invitation for musicians to compose music with a working-class angle to be performed at the exhibit’s opening. Miller knew just how to answer the call.

“I was researching the history of Youngstown on my own initiative looking for artist poets from the area, and I came across Michael McGovern’s poetry,” Miller said. “His poetry was lyrical, and he wrote in the style of the Irish working-class poets.”

McGovern was an Irish laborer who moved to Youngstown around the turn of the 20th century to work in the steel mills. He rose to the position of puddler, a skilled labor position involving the removal of impurities from molten steel.

McGovern gained national recognition in 1899 with the publication of “Labor Lyrics and Other Poems.” He went on to write a popular column for The Vindicator.

Miller said he was moved by McGovern’s poetry and its working-class message. He set McGovern’s poem “The Rolling Mill” to music, which he performed with his family at the exhibit’s opening.

The exhibit will be on display until Dec. 31. Admission is free and open to the public. The steel museum’s hours are Wednesday through Friday from 10 a.m. to 4 p.m. and Saturday from noon to 4 p.m.