The Cleveland Cavaliers’ NBA Championship trophy visited Youngstown State University on Friday as part of the team’s All for Ohio tour. 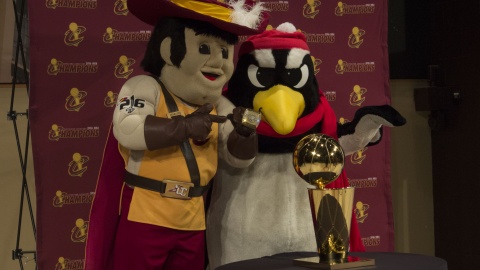 YSU was the next-to-last stop on the tour across Ohio to celebrate the Cavs’ NBA Finals win over the Golden State Warriors in June.

The event was held in the Chestnut room from 2 p.m. to 7 p.m. Students, staff and fans from the community attended the event as the trophy was put on display and crowds lined up to take pictures alongside it.

Guests were welcome to take pictures with Cavaliers’ girls, Pete the Penguin and the Cavaliers’ new mascot, CC, who sported a championship ring of his own.

Local fans said they were excited about the trophy coming to campus. People traveled to see a piece of Cleveland sports history.

Northeast Ohioans credit the victory to the Cavs’ small forward LeBron James, who grew up in Akron. YSU student O’Keal Gist said he is proud to be from James’ hometown.

“Being a kid from Akron and seeing the trophy here, especially knowing the trophy was delivered by another kid in Akron, is truly special,” Gist said.

Tori Pacheco was another fan waiting in line. She has been a fan of the Cleveland Cavaliers since as long as she could remember, and she said their Finals’ win was breathtaking.

“It made everyone in my house cry,” Pacheco said. “We started jumping up and I threw my chair back, and I remember my Dad was crying and I started crying it was a very happy moment for us.”

She said the win taught her to never give up. Frederick Lee Harvey got a similar message from the win. He said he had been a fan of the team for 10 years.

“Keep up the good work, hard work pays off,” Pacheco said. “Hopefully “next year” is just as good as this year!”

Olivier Sedra, the public address announcer for the Cleveland Cavaliers, attended the event. Sedra said it has been a special experience not only sharing the trophy with YSU but with everyone on the tour.

“Every time we see the fans reaction to the trophy on display, I get goose bumps,” Sedra said. “It is incredible to be involved with something like this, and none of us want this feeling to go away. I’ve been working with the Cavs for 11 seasons, and it’s a privilege to do what I do.”

Sedra provides information to the fans during each Cavs game and reciprocates their energy. He said although he speaks for a living, winning a championship makes him speechless.

The All for Ohio tour reached its end as the new NBA season began Tuesday. Sedra said the team will now need to hit the reset button.

“Once we tip the ball up, it is a new season, a new game, and we will have to defend the land yet again,” Sedra said.