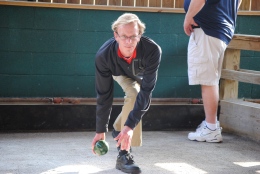 Jeff Hafely tosses a ball across the court during MVR bocce’s opening day on Monday. Hafely represented the Holy Rollers as they took on Valley Foods. Photo by Joe Catullo Jr./The Jambar.

It started with one court and a dozen teams.

About 40 years later, the Mahoning Valley Restaurant in Youngstown — with four courts and almost 80 teams — hosts what owner Carmen Cassese describes as the largest bocce league in the U.S.

“Here in Youngstown,” Cassese said. “How about that?”

“It’s good food, good times and a great game,” said Dave Hinkle, a member of the league since 1992. “That’s why we keep going back.”

The bocce league at the MVR was created in the early 1970s. Cassese said the friendships built over the years have made the league successful.

“Everyone doesn’t come down here because they’re hardcore bocce players,” he said. “They come down because they want to interact with their friends.”

Pat Casey, a league member for 20 years, agreed, saying he keeps coming back for the camaraderie.

A typical night for the MVR bocce league consists of teams from a men’s division and a mixed division (men and women) playing three games.

It also includes food and drinks from the MVR kitchen.

Casey agreed, adding that the food is excellent.

“We have a great time down there,” he said.

Cassese compared the atmosphere of game night to that of a carnival.

“It’s loud. It’s boisterous. It’s fun,” Cassese said. “It’s as expensive a night as you want it to be, but it certainly doesn’t have to be [expensive] at all.”

He also touted the benefits of the sport.

“You can hold a beer while you play,” he said. “What other sport allows that?”

While Cassese is glad to provide an enjoyable atmosphere, he said people do not take advantage of his flexibility.

“It’s a mature group,” Cassese said. “It can be competitive, but not to the extent where there’s much anger.”

In addition to regular season game nights, the bocce league includes a playoff to determine a champion. The MVR also hosts a banquet at the season’s end to give out league awards.

“That’s something to look forward to at the end of the year,” Cassese said. “You can win coats and stuff like that. It’s a fun thing.”

As for the effect his league has on the Youngstown community, Cassese said he thinks it is a good one.

“If you come here, you’d see all four of those courts going and the camaraderie,” he said. “By the sheer numbers, people are having fun, or I wouldn’t have this many teams.”

Hinkle said he, like many others in the league, appreciates the opportunity the MVR presents.

“The Cassese family is awesome, and the MVR is a great venue,” he said.

said he wants to continue the bocce league in the future and thinks it will maintain success.

“As long as we work at making it right and continue to create what we hope is a good atmosphere, we’ll be fine,” he said.

And although he realizes all that his restaurant and league provides, Cassese made it clear that he is not doing anyone a favor.

“The people are doing me a favor by being a participant,” he said.