Several students were waiting for a Youngstown State University grocery shopping shuttle, which is operated by the YSU Parking Services and WRTA, on Friday, Jan. 12, but the shuttle never arrived.

YSU sent a Penguin Alert to inform students of class cancellations beginning at 3 p.m. due to a forecast of worsening weather that afternoon.

Danny O’Connell, the director of YSU parking services, said he was trying to continue to run the shuttle.

“I know that it’s important to the students to be able to get to grocery store,” he said.

O’Connell said the shuttle had to shut down because of the bad road conditions and there was no miscommunication between the drivers and the department; however, there were some miscommunications between the students and workers at the parking services office.

Alin Anjun, a freshman computer science major, said he was waiting for the shuttle with seven other students on Friday.

He said he was waiting for two hours and called parking services multiple times. 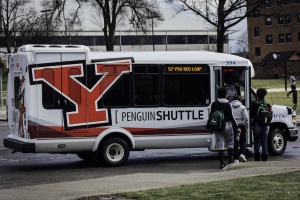 Anjun said most of the students were new to YSU, so he was trying to make sure the shuttle was coming. He said people looked confused.

He said he eventually bought the students an Uber, so they could purchase their groceries at Walmart

“We were waiting there for a long time and no one told us anything,” he said. “If it stops working suddenly, they should provide us some information.”

He said there should be communication next time.

O’Connell said the parking services got phone calls asking if the shuttles were running or not, and they told those students that they were running.

A shuttle driver said he stopped driving at 3 p.m. because he got a phone call from the other driver that classes were canceled after 3 p.m. He said none of the drivers were informed that some students were waiting for the shuttle.

“Maybe we should have canceled right away,” O’Connell said. “With the school closed and everything, there is no way to get the message out. It was a very unusual weather situation.”

Verena Son, an English language institute student at YSU, is from South Korea. She was waiting for the shuttle to get to Walmart for an hour on that Friday.

“I wanted to leave, but everyone else was waiting,” she said. “I was curious where the shuttle bus was.”

She said there is a bus tracking app everywhere in South Korea. Son said knowing if the shuttle is coming or not would help whether she should leave or not and save her time.

According to O’Connell, YSU parking services and WRTA has been working on a bus tracking app that is scheduled to go live sometime in the next few months.

“The app can show you pretty close to where they are,” he said.