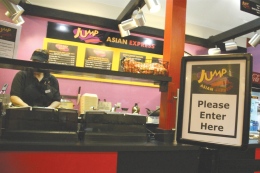 Debbie Long, who has worked at Jump Asian Express in the KC Food Court since August, fills her post behind the counter. Photo by Dustin Livesay/The Jambar.

On Jan. 14, the first day of the spring semester, a Mexican-themed restaurant will replace Jump Asian Express in the KC Food Court.

The new restaurant will have a theme similar to Christman Dining Commons’ late-night Mexican option, Sombrero’s.

Melody Monroe, general manger of Sodexo Campus Dining Services, finalized the decision to replace Jump Asian during the week of Thanksgiving. She’d been discussing it for months.

“Jump isn’t doing what we need it to do, and we can’t get it to,” Monroe said.

Sodexo has tracked Jump Asian’s business at 15-minute intervals, and Monroe said the numbers are around two-thirds lower than traffic at other KC Food Court locations.

“I think it’s about time for a change there,” Dipaolo said. “If it’s like Coyoacan or like Chipotle, then that idea is good.”

No construction will take place, however. Monroe said the existing facilities would serve the new Mexican restaurant well. All that is needed is new paint and signage.

“That’s why it won’t take months,” Monroe said, adding that the transformation will begin Jan. 2. “There’s no actual construction in this.”

Monroe said Sombrero’s, which was introduced this semester, has become a popular option at Christman. She said she believes it will serve students better than Jump Asian.

The new kiosk will still be part of the meal exchange program. Food options are still being finalized, but will include burritos, burrito bowls and vegetarian choices. Monroe said no ground beef would be used — only whole muscle meats and chicken.

“It’s not a Taco Bell by any means,” Monroe said. “I believe the students will find it well balanced.”