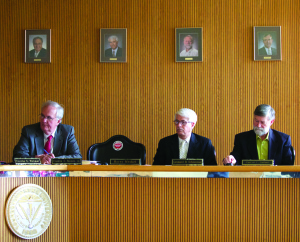 Harry Meshel was noticeably absent from the Youngstown State University Board of Trustees meeting on Wednesday. It was the final board meeting of his tenure as a trustee.

During the previous day’s meeting of the Board’s academic quality and student success committee, Meshel walked out after a heated argument regarding the decision to move communications classrooms into the first floor of Meshel Hall, which was named in his honor.

During Tuesday’s committee meeting, Meshel noted that the building was intended as a state-of-the-art high technology facility and lamented what he perceived as a lack of interest in the computer sciences.

“We can’t get 30 minutes of promotion from this school for the computer sciences department,” Meshel said. “We let these two-year punk schools up and down Belmont Avenue and the others take our computer science students.”

Committee Chairwoman Delores Crawford asked Meshel several times to restrain his comments to the subject at hand because they needed to be conscious of time.

“I’ll help you,” Meshel said, and walked out.

A group of about 25 computer science students sat in silent protest at Wednesday’s meeting, wearing shirts that read, “we need all of Meshel Hall.”

Jordan Vigorito, a human resources major who works in the computer science department, organized the protest. He said the administration’s decision would limit the ability of the department to give students the same opportunities students in other departments have.

Vigorito and the other students started an online petition, which has obtained over 300 signatures.

Following the meeting, YSU Provost Martin Abraham spoke with several concerned students. He said the university is looking at how it can better serve future computer science students, but at this moment the program has declined in size while others have grown.

“We have to right-size our spaces to meet the changes that have occurred in our programs,” Abraham said. “That takes time.”

One of the students said the program has declined in size because students would rather go somewhere with a better facility. Abraham said the university has limited resources to deal with those problems.

He said the declining enrollment and budget shortfalls the university has struggled with over the last several years has led to $100 in deferred maintenance, but the university has requested a $2 million investment in Meshel Hall from the state of Ohio.

“We’re optimistic that the state will support … our request and we’ll have some money to invest in Meshel Hall next summer,” Abraham said.

The students seemed upset by the fact that progress was at least a year away.

In his report to the Board, YSU President Jim Tressel commented on Meshel’s service at the university and beyond.

“I think of the way he has served our country, as a member of the Seabees, and won two bronze stars, and then came back and served our city, and served our state and served our board and does it with great passion and great love for the institution,” Tressel said.
Board Chairperson Carole Weimer said Meshel’s presence will be missed on the board.

Trustee Ted Roberts also thanked Meshel for helping to maintain the integrity of the university.

Meshel graduated from Youngstown college and went on to earn a master’s degree at Columbia University. He served in the Ohio Senate for 23 years and played a key role in the foundation of the Veteran’s Resource Center that opened during the previous academic year.

It was also the final meeting of Student Trustee Bryce Miner. Miner thanked his family, friends and the university community at large.

“I’ve learned that hard decisions are not easy and change is difficult, but with change great opportunities arise,” Miner said. “I know that YSU is in a great place in the hands of President Tressel’s leadership, and I am excited to see what the future will bring.”

At the opening of the meeting, Weimer asked those in attendance to observe a moment of silence for Trustee Jim Greene, who passed away over the weekend.

During the meeting, the Board voted to lease an acre of land to lease property to Hallmark Student Housing to facilitate the second phase of their University Edge development, which could include housing or retail. They also reached an agreement with the YSU Fraternal Order of Police; the previous agreement expired last July.