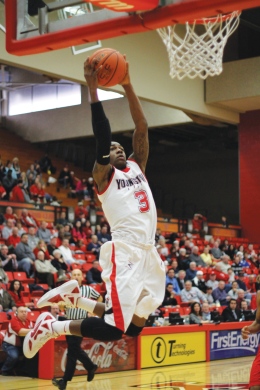 For Jerry Slocum, Youngstown State University’s men’s basketball head coach, this fall has been his “most enjoyable” as a Penguin.

However, the early fall season hasn’t been as kind to the YSU players — all thanks to Slocum.

From Sept. 24 to Sept. 28, Slocum directed a “boot camp” for his team. The conditioning program included waking at 5 a.m., being on the court at 6 a.m., flipping 400-pound tires, pulling sleds and, well, you get the picture.

It’s been 12 days since boot camp ended, and the Penguins are still sensitive about the subject.

“I don’t want to talk about it,” said senior forward Damian Eargle, laughing. Junior forward Kamren Belin described it in one word: rough.

Still, the players know that boot camp had its positives.

“It built character along the way,” Belin said. “It definitely brought us closer together.”

Allen said, “We were really able to rev up our conditioning with the workouts. After that, we’re in pretty good shape.”

Or, as Eargle summed it up: “It was bad. It was horrible. But it was good in its own way.”

As a result of last season, YSU was selected fourth in the preseason Horizon League polls, the highest the Penguins have ever been selected.

“I think it’s a direct result of a program that has longed for some respect,” Slocum said. “I think we played our way into that respect last year.”

“They bring things that I think we needed desperately,” Slocum said. “They bring size, with all of the guys being big for their positions. And they all shoot the ball well.”

While they’ve gained needs, Kendrick Perry said he realizes they need to replace leadership that was lost.

“With Ashen gone, he was a huge voice for us last year, so I’m just trying to feel his shoes,” he said. “This year I’m priding myself on being a leader and making sure these young guys are getting adjusted to the college game.”

“With the talent we have here — everybody that came in and the returners — and KP being all-league, we should be good,” Belin said.

Still, with the season a month away, Allen knows there is work to be done.

“Coach has put a lot of emphasis on defense during the time that we’ve had so far,” Allen said. “I think that will be something that will continue through the rest of the days leading up to the games.”