Students may need to leave early for class to avoid being late. Lincoln and Wick Avenue will be closing for construction during the fall semester, resulting in lane closures and detours.

Lincoln Avenue will be closed from Wick to Fifth Avenue. Construction has already begun on this street, and the project should be complete in December. Youngstown Mayor John McNally said it may be open to drivers again as early as October.

Enhancements include widening roads, resurfacing and improving curbs, lighting, lane configurations and landscaping. The Lincoln Parking Deck will remain open, but the Lincoln Avenue entrance will be closed.

“These projects are being done to improve the safety of the roadways, not just for the drivers, but especially of the pedestrians,” he said. “It will improve the appearance of a major gateway into campus.” 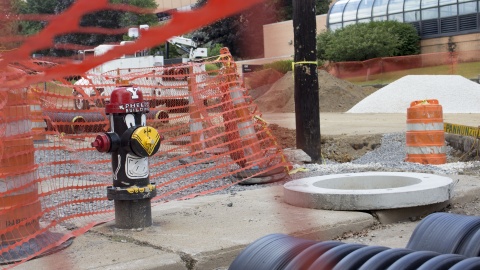 There will be limited pedestrian access on Lincoln and Wick Avenues during the projects, and detours could change from week to week. McNally said students who normally jaywalk will no longer be able.

“They’re going to put fences up so you can’t cross midblock,” McNally said. “We don’t want anyone walking across construction sites.”

Chuck Shasho, deputy director of Public Works for the city, backed him up, saying pedestrian cooperation will be a big help.

Several students have expressed concerns about the inconvenience.

Hannah Jefferson, a literature studies major, said it’s irresponsible for the city to begin construction near the end of summer break.

“It’s disappointing [they] began major work like this during the busiest time of the academic year,” she said. “Freshmen are attempting to get acclimated to getting around the campus.”

Amanda Cutlip, who crosses Lincoln for her campus job, is concerned about dangers associated with construction and parking access.

“The fact that the process could not start during May is ridiculous,” she said. “The project would have already been 3 whole months in process with minimal students on campus during the summer semester.”

Shasho understands the frustration, but explained they are using federal money so they have to abide by the Ohio Department of Transportation’s rules.

“When ODOT gets involved, you have to follow their schedule and bidding procedure,” he said. “We probably would have been able to finish this project a lot quicker if we were paying for it by ourselves, but we’re not.”

Engineers and city officials have been working on design work and scheduling for about two years.

Construction on Wick Avenue is scheduled to start during the third week of September and could take up to a year to complete. The first phase of this project will replace water and sewer lines from Wood to McGuffey Street, and then utility lines will be buried from Rayen Avenue to 422.

The total project will cost $4.9 million. The city will be paying about $3.8 million with an additional $800,000 coming from YSU. Youngstown CityScape will fund the remainder.

“The Lincoln Avenue project will be a minor inconvenience compared to the Wick Avenue project,” Shasho said. “It’s a much bigger project.”

The Wick Avenue entrance to the Wick Parking Deck will be closed for several months during construction. The Butler Art Museum will remain open, but other buildings with alternate entrances will not be accessible from Wick Avenue.

They don’t expect to have the whole street closed throughout the entire project. McNally said the university is working to make the parking deck easier to navigate from the Walnut Street entrance.

“They have made some improvements to the deck and made some crossovers to make accessing the Walnut Street entrance a little easier,” he said.

Both streets will be improved tremendously, McNally said. The city also has plans for Fifth Avenue. McNally said he hopes that construction will begin in 2018.