“No More Peace!” is a satire with music. The story is about Napoleon betting Saint Francis of Assisi that he can prove humanity loves nothing as much as it loves the romance and danger of war. One fake telegram later, chaos ensues.

The cast has spent many hours in preparation for the show, along with making small life changes to capture the true emotions of the character they are portraying.

AnnMarie Lowerre is playing the part of Rachel, a passionate woman who fights for love and peace. Jessica Hirsh is playing the role of Laban who is the classic businesswoman, who utilizes her relationships to advance her in the business world. Shanon Coleman is playing the part of Jacob, a Brazilian foreigner in Dunklestein who wants nothing more than to marry his fiancé Rachel. 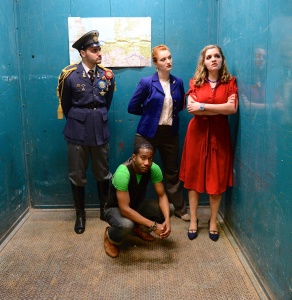 The casts rehearsal process started the day before Christmas break. Having rehearsals nearly every night from 6-10 p.m., except Fridays and the weekends.  Now the cast is in tech week preparing for opening night.

Hirsh’s character was originally written as a male role and has been adapted to become a female role.

“The most difficult part of the rehearsal process has been that my character is written to be male,” Hirsh said. “There are certain things that my character does in the show that has to be justified in different ways if the character is a female. Both men and women have different societal expectations, and when a character gets gender bent, all of those must be taken into account.”

Along with developing their characters, the cast has had to revamp their study and sleep schedules to be able to perform at their best.

“I had to start rescheduling times to study,” Coleman said. “Making sure I go to sleep at a decent time and keep going over my lines religiously. Eating healthy, making sure I’m drinking enough fluids in this Youngstown weather is important.”

“No More Peace!” is not as well-known as past University Theater productions, which has allowed the director and cast to make the show more unique to YSU.

“Being able to make this show our own is my favorite part,” Lowerre said. “There is pretty much nothing on the Internet concerning this show.  As a group, we had to create our own story based on the script, history, and creative choices. It has been such a great experience being able to watch our story and interpretation grow.”

The play is set in the 20th century, even though the setting is not in current day people can still learn a valuable lesson from the plot.

“The show is set in the early-mid-20th century; the themes are just as relevant today as they were back then,” Hirsh said.  “This is a play that can still teach us, and it’s a play that needs to be seen.”