On Saturday Feb. 25, members of the community came together to discuss ways to improve and innovate the Youngstown community at Villa’s shop in Liberty.

Villa in Youngstown, a clothing and sneaker store, held the very first “Take Back the Community” panel discussion. Jerome Justice, who runs the store, put the event together with the hopes of bringing about change.

“There are plenty of great people doing different things and it’s going to take an army to change our community,” Justice said. 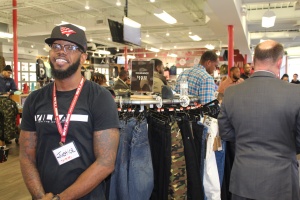 There were over 100 people in attendance and the floor was open for asking questions and bringing up different topics.

Keland Logan, from The Colony, said the event was an open forum discussion for all the groups who were attending.

Some of the questions asked pertained to the school system, violence in the community and the local government officials. Brandon Perry, the founder of City Kids Care, encouraged people to show their support for community events.

“If you are a part of the city, a part of Youngstown, attend as many events as you can. Not just the ones downtown,” Perry said. “A lot of organizations get discouraged when they don’t see support.”

McNally expressed that local government officials are more than willing to attend any event happening in the community — they just need to be informed of them.

Lester Scott II from the Dare To Dream Family Foundation spoke about hardship in the community and a lost generation not having a voice.

“We live in a poverty stricken environment, we have parents working two jobs to support themselves and kids worried about their lights getting cut off,” Scott said. “It’s not feasible for them to be focused on something so far ahead when they need help now.”

The panel discussed ways to help the community grow and to help put an end to hardships. Councilman Oliver touched on a new entrepreneur program that is currently in the works and will help citizens despite their past.

Bentley, the executive director of the Human Relations Commission, urged parents who are concerned with the education system and after school programs to contact the new CEO directly.

“If you ever have an issue with the education system or with programs, you have to monitor when there’s a change in the administration; that’s the best time to get in,” Bentley said. “Call down to the Board of Education, call down to the CEO.”

McDowell challenged those in attendance to do the unpopular thing in order to help the community. He said people need to start confronting their friends and family members who are falling down the wrong paths.

“How many of you are willing to say ‘Listen dude this isn’t the way to do it anymore’? I need to confront you and say ‘I know that’s how we used to do it, but we can’t anymore,’” McDowell said. “Our mentality has to change. You can fix Youngstown’s structure all you want, but if you don’t get to the heart of these kids, it’s never going to work.”

Justice said he would like to hold another discussion next month where the focus will be setting goals to put into action the ideas that were discussed.