The film loosely retells the story of an FBI investigation into the murder of three civil rights workers in Mississippi. Mitchell attended the screening with two of the FBI agents and a journalist that wrote about the investigation. 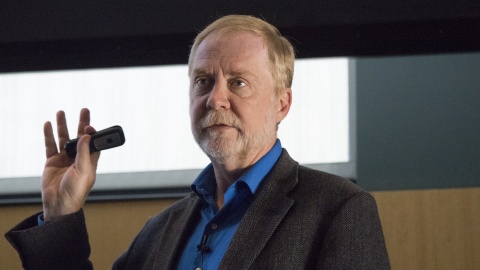 “The thing that shocked me was at the end of the film,” Mitchell said. “Nobody ever got prosecuted for murder.”

Twenty-five years later, a former member of the Ku Klux Klan named Edgar Ray Killen would be found guilty for his part in the murders because of Mitchell’s reporting for the Clarion-Ledger in Jackson, Mississippi.

Mitchell was on campus to talk about that case and others he reported on throughout his career as an award-winning investigative journalist. He was also in town to deliver the keynote address at the inaugural event for the Simeon Booker Courage Award.

About a month after the screening of “Mississippi Burning,” Mitchell learned about sealed public records from the Mississippi State Sovereignty Commission — an organization that reported to the governor and served as a de facto intelligence agency to promote segregation. The commission closed in 1977, but its records were sealed for 50 years.

“If someone tells me I can’t have something, I want it like, a million times worse,” he said.

Mitchell cultivated sources that helped him gain access to many of the records.

The first case he broke concerned the killing of NAACP leader Medgar Evers. The records showed that while the state was investigating a Klansman named Byron de la Beckwith for the murder, the State Sovereignty Commission was secretly assisting his defense.

Mitchell’s story ran on Oct. 1, 1989. By the end of October, the district attorney reopened the case, and 14 months later Beckwith was indicted. Rob Reiner would later make a film about the case called “Ghosts of Mississippi” with actor Jerry Levine playing Mitchell.

“That kind of started my journey,” Mitchell said. “After I got done with each one, I would pick up another one.”

Since then, his reporting has helped put 22 people who committed crimes during the civil rights era behind bars — including perpetrators in the firebombing of NAACP leader Vernon Dahmer, the bombing of a Birmingham, Alabama church that killed four little girls and the “Mississippi Burning” case.

Catfish with the Klan

With the exception of Samuel Bowers, co-founder of the White Nights of the Ku Klux Klan in Mississippi, who ordered others to firebomb Dahmer’s house, Mitchell has interviewed the perpetrators of the crimes.

“It seems like I’m always taking them out to eat,” Mitchell said. “I took [Bobby] Cherry, [who planted the bomb in the Birmingham church], out for barbecue, and I took Killen out for catfish.”

Since they have gone free for so long, Mitchell said they come off as if they think they’re invincible and let things slip.

Killen told Mitchell he wasn’t responsible for their deaths, but he wouldn’t say that the people that were responsible were wrong.

“Killen at one point said, ‘There’s some guy in Jackson that just keeps stirrin’ things up,’” Mitchell said. “I just didn’t have the heart to tell him it was me.”

He also offered up a story about how he called the FBI to ask who killed Martin Luther King, Jr. When the FBI asked why he wanted to know, he reportedly said “Man, I want to shake his hand.”

The key to getting people to open up, Mitchell said, is making them feel comfortable.

He’s been in some sticky situations. Beckwith told him that if he wrote bad things about white Caucasian Christians, God would punish him, “and if God doesn’t punish you, other people will punish you for Him.”

Staying in the South

He’s had opportunities in larger markets, but he said the stories are in Mississippi. A former executive editor of the New York Times asked if he would be interested in working for them, but Mitchell said he got the impression he wouldn’t be able to continue reporting on Mississippi.

“When you’re a reporter, the material makes for great stories,” he said. “We’ve got it in Mississippi.”

Mitchell said he didn’t have a particular interest in the civil rights movement — he wasn’t taught about it in school — but he learned a lot about it through working on the cases. He’s currently working on a memoir that tells that story.

“My idea is to bring people along on that journey,” he said. “To learn as I learned.”

It’s also given him an interesting perspective on the modern civil rights battle being fought by Black Lives Matter. He said the biggest difference between the two periods is the existence of cell phones.

“You might have had similar things take place [in the past],” Mitchell said. “But then it was authority’s word versus other people’s word, and who is telling the truth?”

He said police officers need to be paid more, saying that in the past a police officer in Jackson, Mississippi, with a family of four qualified for food stamps. But there also needs to be better training and a greater focus on community policing, building relationships between citizens and police.

“Anytime we dehumanize people and we think those are the bad guys, you’re almost more prone to pull your gun and pull your trigger,” he said.