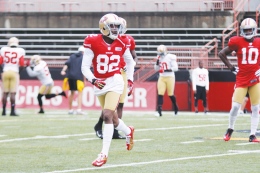 More specifically, the homes where Manningham and Peterman were raised are in the same neighborhood on the city’s west side.

And while the men shared the same neighborhood, they also share an opinion of their upbringing: Growing up in that Warren neighborhood was not ideal.

“In the neighborhoods that we grew up in, there’s a lot of drug-related problems, gang-related problems and houses getting broken into,” said Peterman, who is number 21 on the team. “It’s just not the best place to raise a family.”

Manningham, who was back home last week as the 49ers prepared to take on the New York Jets, took time to reflect on his past during Wednesday’s press conference.

“It means a lot being from this area and just knowing how tough it is to get out of here,” he said.

“I know a lot of guys who I grew up with that could be in the NFL or be big-time Division I football players,” Peterman said. “But they let the influence of the street life get the best of them.”

Peterman, an Ursuline High School graduate, originally committed to play football at Syracuse University, but he was ruled academically ineligible. He then bounced from Georgia Military College to the City College of San Francisco before ending up at YSU.

“You have to use those challenges to motivate you,” said Peterman, a junior. “Things like you didn’t grow up with a silver spoon in your mouth and now you gotta go and get what you dreamed about.”

While Peterman’s still in the process of reaching his dream, Manningham — a Warren G. Harding High School graduate — has had plenty of professional success. Drafted by the New York Giants in 2008 out of the University of Michigan, he won his first Super Bowl ring last season.

Manningham said he accepts and cherishes the responsibility of being a role model to area youths.

“Coming from around here, you don’t really see that many people who encourage, who are trying to help out,” Manningham said. “But these kids, they’re more talented than we were when I was in high school. They need someone to tell them how it’s done and anything is possible.”

One of those kids that followed Manninghan at Harding is YSU redshirt freshman running back Demond Hymes. Having lived in both Youngstown and Warren throughout his childhood, Hymes knows the reality of the situation.

“We’ve got good talent, but some people just don’t push themselves, or they take the easy way out,” he said. “They want to be lazy.”

Hymes added that there are ways to spin the negative influences into positive results.

For Hymes, Peterman and all area hopefuls, Manningham is a prime example that success can be made from a difficult upbringing.

“He shows that anybody can make it,” Peterman said. “It doesn’t matter where you’re from or what you’ve been through. If you just work hard and keep your mind to something, there’s always light at the end of the tunnel.”