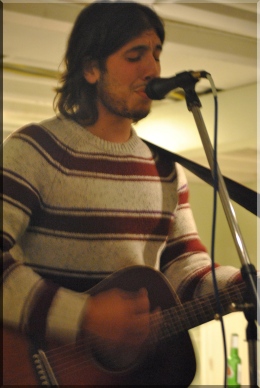 Jordan DePaul practices for his final performance in Youngstown before he moves to Nashville, Tenn., to pursue songwriting. Photo by Marissa McIntyre/The Jambar.

After five years of performing in Ohio and Pennsylvania, Jordan DePaul & The Reputations are calling it quits.

The band members will perform their final show at Cedars Lounge in downtown Youngstown on Friday.

DePaul, a marketing major at Youngstown State University, said he hopes to flex his muscles as a songwriter in Nashville, Tenn.

“It was my cousin’s idea to have this final show for everyone to come and say goodbye and to show the impact the band has had on all of us,” DePaul said.

DePaul said years of watching his cousin, Michael Cleland, perform made him want to pick up a guitar.

The band formed in 2007 after Cleland’s band “fizzled out,” DePaul said.

“That’s how we all sort of came together,” Cleland said. “It was very natural. We just started jamming together.”

The band had previously disbanded, but opportunities arose that made the members change their minds.

“Two weeks after we broke up, I got a call from the Covelli Centre asking if we would be the opening act for the Goo Goo Dolls,” DePaul said. “How do you say ‘no’ to that?”

He said it was an awesome experience to play in front of thousands of people.

“For a while, no one actually let us quit,” DePaul said.

The band’s swan song show will be divided into three sets. In each set, the members will perform songs from different stages of the band’s development.

“It’ll be fun for us to all meet one last time, but I’m excited for what’s to come,” DePaul said.

The band’s guitarist, Joseph Verzilli, a media communications major at YSU, said he’s excited to see years of the band’s progression on one stage.

“It’ll be cool to see all of that in one night,” Verzilli said. DePaul said he is interested in all types of music, so songwriting is a more appropriate goal than performing.

“Because I write so many different types of music, I’d have to pick and choose if I just performed,” DePaul said. “I just don’t want to be defined.”

He said his musical influences stem from folk, rock, pop and even opera. He would classify himself as a hybrid of Bob Dylan, Tom Petty and Kings of Leon.

He said he will miss the support system he has in Youngstown when he moves to Tennessee.

“I’m real lucky to play with these guys because they make me better,” DePaul said.

Michael McGiffin, the Reputations’ bass player, said he’s sad to see DePaul go, but will be there if he needs him.

“He knows we’re standing behind him and if he ever needs help, he can reach out to any one of us,” McGiffin said.

Cleland said even though this is the last time they’re playing as the Reputations, it won’t be the last they see of one another.

“We’re all going to find ways to play together again,” Cleland said.