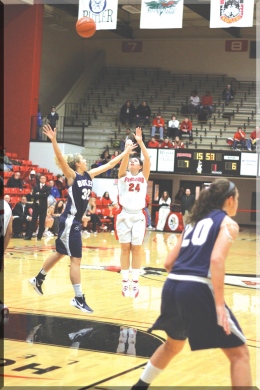 Monica Touvelle (24) shoots a jump shot during a game last season against Butler University. The Penguins won five games in the month of November. Photo by Dustin Livesay/The Jambar.

Last year, the team won 10 games. This year, the Penguins have accumulated five wins after the first month — for the second time in school history.

The main reason for success is the leadership of senior forward Brandi Brown. Twice she was named Second Team All-Horizon League and was the Horizon League’s Preseason Player of the Year last season. She earned HL Co-Player of the Week honors earlier this year.

Brown is averaging 19.7 points and 12.7 rebounds per game this season. On Saturday, she scored 13 points and collected four rebounds, but the Penguins still won. Boldon has another secret leader who sparkled against Stony Brook University.

Junior Liz Hornberger scored 15 points (all 3-pointers) and kept her team motivated even as a benchwarmer during the 76-43 rout.

Boldon said during Saturday’s post-game conference that his offense is better when she plays, even if she scores no points.

“She’s got a wonderful understanding of our offense,” Boldon said.

“I don’t think I’ve coached a kid that understands our offense as well as she does and what we’re trying to do defensively.”

Hornberger said during the conference that the team no longer focuses squarely on Brown.

“Brandi scores a lot of points, but she’s not a selfish player,” Hornberger said. “Brandi’s about winning and about the team, and that’s what I love about her. They tried to double her last year and was ready this year to make those extra passes.”

The Penguins responded to Brown’s extra passes, losing one game on Nov. 27 against Northern Kentucky University. YSU led by four points with two seconds remaining before blowing the game.

While the Penguins are also getting help from freshman Shar’Rae Davis (HL Newcomer of the Week this week) and others, YSU’s journey to a conference championship falls around Brown and Hornberger.

Boldon said they are the best leaders he’s ever had at YSU.

“When you have kids that are contributing with that effort, I don’t think anybody’s taken more charges than Liz and Brandi,” he said.

“When your top two players are doing that, it makes it so much easier for the others to fall in line, be a part of it and buy into it.”