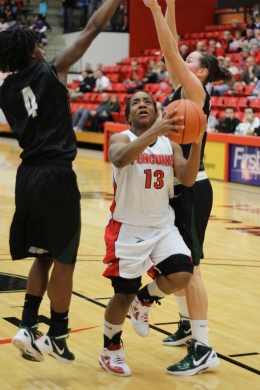 As senior guard Macey Nortey took the pass from fellow senior guard Kenya Middlebrooks, the seconds ticked down, and she raced down the court.

Without calling a timeout, Nortey was able to slide around the defense for a game-tying layup as time expired, sending the game to overtime. But the Youngstown State University women’s basketball team ran out of gas after that.

The Penguins overcame a 15-point second-half deficit but couldn’t sustain the momentum in overtime, falling to Wright State University, 71-66.

YSU head coach Bob Boldon said in the post-game conference that his team gave the fans a good effort.

“That’s a really good team; they are alone in second place now,” Boldon said. “I thought they battled, and I thought they made some tough shots, but that didn’t deter us. We didn’t start to hang our heads, and we really gave a great effort to get into overtime.”

Freshman point guard Kim Dennings scored the first seven points for the Raiders, causing problems for the Penguins during the entire game. She finished with 25 points, 14 rebounds and nine assists.

“She’s a good kid and hit tough shots,” Nortey said. “Coach has been telling us all week that she is going to shoot as much as she could whether she missed or made.”

Boldon thought the team played well and kept its composure.

“It went back and forth,” Boldon said. “I thought we got a pretty good look with 10 seconds to go, and then, unfortunately, it didn’t go our way. But I thought our kids hung in there and didn’t panic and didn’t start to jack up crazy shots. We showed pretty good patience.”

The Penguins played in front of an enthusiastic crowd, feeding off their energy.

“It is nice, but as a team we focus what is on the court.” Nortey said. “I love our fans, love our band. I love everyone.”

Boldon agreed with Nortey, stating he hopes the support continues.

The Penguins shot the second-most 3-pointers in school history, just one away from the record of 48.

Although the Penguins didn’t leave with a victory, Boldon remained upbeat.

“I think tonight is a step forward,” Boldon said. “I know that sounds odd coming from me. I am not happy unless we win and play well, but I do think we played well, and hopefully we are smart enough to realize that. We showed some character and some toughness.”