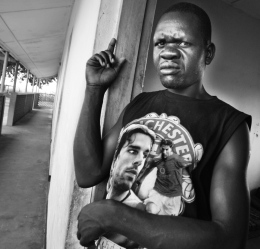 Francis Ochaya, who served 12 years with the rebels, including several as a personal escort to Kony and his harem of child brides before escaping to Gulu in March, said he often heard Kony discussing the war-crimes case with his No. 2 man, Vincent Otti, September 30, 2006. “Both Otti and Kony said they won’t come out if the case is still there,” Ochaya said. “They don’t fear any punishment from the people. They only fear the court.” (Vanessa Vick/MCT)

Freshman Max Gocala watched half of the documentary after a friend posted a link to the video on his Facebook wall. However, he lost interest and did not finish watching it.

“The filmmakers had good intentions,” he said. “I felt something for it, but sitting in front of my computer isn’t going to change the world. It’s going to take more than just me.”

Gocala said the video creates a false hope for viewers.

“People are under the impression that watching a video on YouTube is going to change the world,” he said.

Freshman Michael Bellas called the video shocking. He started to watch it, but never finished.

“I feel the producers were trying to do more to elevate themselves to celebrity status and avoided topics that should have been included and inserted some information that made them look good,” he said.

Bellas said viewers who want to help should begin by helping those around them.

“It takes away from looking at some of the issues in America — not saying our troubles are as bad,” he said. “We’ve been trying to help out over there for a while. Are we really making a difference?”

Senior Eric Chianese called the video sensationalist and said he thinks the video is overhyped.

“I only watched, like, 30 seconds of it,” Chianese said. “It’s not that I want to be ignorant. Stuff like that is hard for me to watch.”

The film calls for supporters of the “Stop Kony” campaign to hang posters on April 20 to raise awareness of the atrocities committed by Kony and the LRA.

Carrie Anderson, coordinator of programs and marketing for campus recreation and student programming, has not heard of any YSU student involvement with the Kony 2012 campaign.

“There may be a group out there that is, but they have not scheduled an event for that reason yet,” Anderson said.

Travis Battiest, the Student Government Association’s vice president for university affairs, said SGA has not heard about any events either.

Battiest said students are permitted to hang Kony awareness posters, provided that they are approved by SGA.

“As long as it’s non-offensive material and hung where appropriate, we can’t stop them,” he said.