The Kitchen Post, serving American Nouvelle cuisine, opened in downtown Youngstown in April. The restaurant is a short walk from Youngstown State University.

Since the former location in Struthers, Ohio, took off, The Kitchen Post relocated their cozy 34 seat restaurant to inside Erie Terminal Place for an expansion.

Linda Fowler is part-owner with her son and Executive Chef Ross Fowler. The Kitchen Post was created when the pair saw a need for something different in the area.

Fowler said her son inspires the family with his artistic approach on food.

“He takes American and international classics and gives them a twist,” she said. 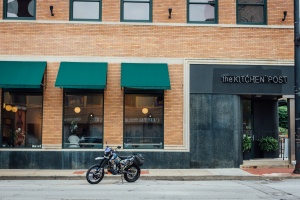 Fowler said The Kitchen Post strives to combine simple ingredients with the social aspect of eating to create a community friendly atmosphere for guests.

“At their first location, I usually had their catfish tacos. At their new location, I’ve had their chicken biscuit and chicken and waffles. Every time I went, the food was delicious,” she said.

Smith said she thinks The Kitchen Post sets itself apart from other restaurants in Youngstown because it offers food that people can’t typically find in the region.

“When I think of Youngstown, I usually think of pasta and pizza. But at The Kitchen Post, you can order things like chicken and waffles, which aren’t available many places. I also think their hours make them super accessible for a college campus,” she said.

Emily Young, Youngstown community member and YSU alum, said the menu is out of the ordinary for the area.

“You’d never think tongue tacos would be so delicious,” she said.

Fowler said the unique, constantly changing menu is what sets The Kitchen Post apart from other Youngstown restaurants.

“We try to push the envelope and get people to try new things,” she said.

Fowler said she hopes that customers like the restaurants food and atmosphere enough to keep coming back to spend time there.