The annex is located on the second floor of Kilcawley Center in the space that the former bookstore occupied.

It consists of a recreation area for students with pool tables and air hockey, the Penguin Plug-In and new offices for the Student Government Association, Penguin Productions and Student Activities.

The Penguin Plug-In is an area where students can charge their mobile devices and laptops and relax, according to Vice President of Student Affairs Eddie Howard.

Howard said the Kilcawley Center Space Utilization and Reallocation Advisory Committee worked on the project for about a year and wanted an uninterrupted space with opportunities for student engagement to occur in Kilcawley Center.

Additionally, he said there is a push to attract students to stay on campus for more than just their classes. 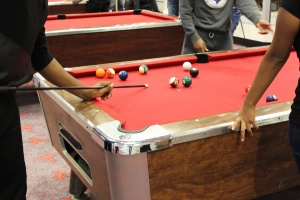 “We’re trying to develop initiatives and ideas that get people away from thinking that they drive in, go to class, get in their car, turn around and drive away,” Howard said. “We want you here. We want you to hang out and be around.”

Rayann Atway, president of SGA, said opening the annex during the first week of school was a great way for students to get excited about the spring semester.

With the new SGA and Student Activities office being located across from the recreation area, Atway said she is able to see students connecting with each other.

“It’s really cool to see the space bring so many people together to hang out, whether it be to study, play pool or just relax in between classes,” she said. “It’s been such a high traffic area this past week and I expect it to stay that way throughout the semester.”

Atway said it was incredible to walk into a new office on the first day of classes.

“They’re much more spacious and truly promote collaboration amongst our representatives and students. The office space really promotes working in a team environment,” Atway said.

Howard said plans are being made to develop a food service outlet in the annex to draw students there. He said that students can buy snacks within the next couple weeks.

Braden Nagy, a freshman biology major, played air hockey in the annex with a friend and said he previously played basketball on campus, but is happy to have another place on campus to do whatever he wants.

Brittany Heasley, a Kilcawley employee, said people are making the annex their hangout.

“We get super busy during lunch time, when there isn’t class. We are getting a lot of traffic because people are finding out about [the annex],” Heasley said.

Additionally, Heasley said it has been busy considering the fact that the annex has been open for two weeks.